After sailing through space for more than 10 years, including nearly three years in deep-space hibernation, the European Space Agency’s Rosetta spacecraft will land a robotic probe on a comet. 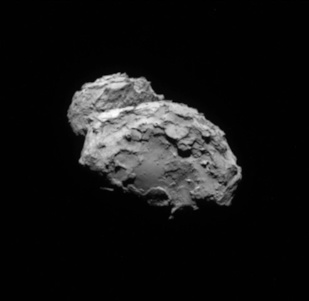 Rosetta will come within 22.5 kilometers (14 miles) of its target, comet 67P/ Churyumov-Gerasimenko, known to mission investigators as C-G, on Nov. 12, 2014, when it will attempt to drop a lander for the first-ever observation of a comet from its own surface. The orbiter and lander are carrying 20 specialized instruments, and the mission is designed to observe C-G for a year or more.

University of Maryland astronomers Lori Feaga and Michael A’Hearn are co-investigators working with an instrument aboard Rosetta called Alice, an ultraviolet spectrograph. Alice is sending back the first observations ever made of a comet’s surface in far-ultraviolet radiation, which cannot be detected by telescopes that rely on visible light. Developed by Southwest Research Institute (SwRI) in Boulder, Colo., Alice is providing sensitive, high-resolution data from the comet’s surface. By viewing a comet up close in far-ultraviolet light, investigators hope to gain new information about this comet’s gases and ices, and to learn more about the evolution of comets in general.

Sometimes referred to as “dirty snowballs,” comets are primordial fragments of the materials that formed our sun and its planets. First discovered in 1969, C-G has orbited the sun many times and has already burned off much of its original gas and icy material, says Feaga, an associate research scientist. Earlier observations revealed C-G’s size, about 3.5 by 4 kilometers (2.2 by 2.5 miles). But since July, when Alice and other instruments began mapping the comet’s surface daily, it has become apparent that C-G has “two distinct lobes, shaped like the head and the body of a duck,” says Feaga.

If you're interested in attending our comet landing viewing party on Nov. 12, visit http://cmns.umd.edu/news-events/features/2582.