Big Questions In Science- 9) How do mathematical models explain nature?

Big Questions In Science- 9) How do mathematical models explain nature? 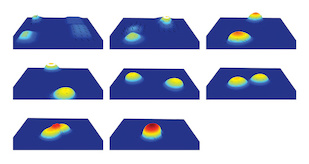 Konstantina Trivisa sees mathematics in play everywhere she looks, whether it’s a flock of birds flying overhead, a school of fish in a stream, the ocean’s waves or the blood flowing through our veins. The mathematics professor applies her expertise in nonlinear partial differential equations to model complex physical systems and to prove how existing models apply to specific phenomena. “I’m not the type of mathematician who develops an idea simply because it’s beautiful mathematics,” says Trivisa. “I always have an application in mind that would interest an engineer, physicist or biologist.”

Take the example of biologists studying the dynamics of flocking birds. Using traditional “particle systems,” the research is computationally expensive and time consuming. “With my collaborators, I constructed a model that captures the relevant phenomena, including unpredictable events, such as the presence of wind. This model can greatly reduce the computational cost of investigation,” says Trivisa.

Much of Trivisa’s research focuses on developing the mathematical methods to better understand fluid dynamics, materials science and phase transition processes. She received a prestigious NSF Presidential Early CAREER Award for her work, and plans to apply her mathematical skills, using a fluid dynamics and mechanics approach, to biomedical issues. She is beginning to investigate fluid-structure interaction in blood flow, which is relevant for the design of cardiovascular treatments, such as stents used to improve the flow through narrow or weak arteries.

A native of Greece, Trivisa moved to the United States in 1991 for her doctoral studies. She joined CMNS in 2000 and currently directs the interdisciplinary Applied Mathematics, Statistics, and Scientific Computation Program and is an affiliate professor in the Institute of Physical Science and Technology. “Working with a large community of scientists and engineers keeps me focused on the big questions in science,” says Trivisa, who continues to foster scientific collaborations in which she can apply mathematics to provide key answers.