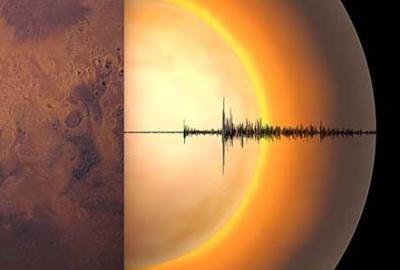 First detection of surface waves on Mars paints a better picture of its structure, according to new research by UMD scientists and NASA InSight team.

Researchers have observed seismic waves propagating along the surface of a planet other than Earth for the first time. The marsquakes that resulted from two large meteorites that hit Mars were recorded by NASA’s InSight lander and analyzed at ETH Zurich in collaboration with the InSight Science Team, which includes researchers from the University of Maryland.

Published in the journal Science on October 28, 2022, the team’s paper provides new insights into the structure of the Martian crust, bringing scientists closer to learning how the planet formed and evolved over time.

“This is the first time seismic surface waves have been observed on a planet other than Earth. Not even the Apollo missions to the moon managed it,” said the study’s lead author Doyeon Kim. Kim is currently a visiting assistant professor in the UMD Department of Geology and senior assistant at the ETH Institute of Geophysics.

After almost three years of detecting only body waves (seismic waves traveling through the body of a planet) on Mars, the InSight team finally observed surface waves (seismic waves traveling along the surface of a planet) in late December 2021, when two meteorites collided with the red planet. Atypical quake readings led the researchers to suspect the impact sources were near the surface, so they compared the data with information from the Mars Reconnaissance Orbiter. Images taken by the orbiter confirmed that both meteorite impacts created hypocenters (the point of origin for a quake) on the surface of Mars.

“Before this, all our knowledge of the Martian crust was based on what was right below the InSight lander,” said UMD Associate Professor of Geology Vedran Lekic, a co-author of the paper. “But Mars is a big planet—we didn’t know if the crust was different in other locations across the planet.  With these surface waves, we were finally able to obtain a better understanding of the crust along a big stretch of Mars.”

A planet’s crust, or its outermost solid shell, provides important clues about how that planet formed and evolved over time. Most planetary crusts, including those of Earth and Mars, formed through early dynamic processes in the mantle and were later modified by other events such as volcanism, sedimentation, erosion and impact cratering. As a result, crusts can allow researchers to gain a better understanding of the land-shaping conditions of a planet from billions of years ago.

To learn more about Mars’ crust, the research team analyzed the velocity of surface waves coming from the two meteorite impacts. This allowed them to exploit the relationship between surface wave velocity, frequency and depth to estimate the average properties of the crust 3 to 18.6 miles below the surface of Mars.

On average, the Martian crust between InSight’s seismometer and the two meteorite impact sites did not vary strongly with depth and had faster seismic velocity than what was previously observed directly below the lander. The faster velocities suggest either compositional differences or reduced porosity in areas traversed by the surface waves.

“The composition of the crust will determine some of the density, but so will factors like porosity; if you have a lot of holes in the crust, it can also decrease the density of the material,” explained UMD Associate Professor of Geology Nicholas Schmerr, another co-author of the paper. “A volcano, with all its intrusions and magma coming up through the crust beneath it, would have also altered the crust density and composition in that region. As we look further north on Mars, there’s probably some subsurface ice in the crust below the impact site, which is less porous and very different from what we see under the InSight lander.”

The team’s findings may also provide answers to a centuries-old mystery: the crustal dichotomy of Mars.

“Mars has a very unique feature, which is the very sharp contrast between its Northern and Southern hemispheres,” Lekic noted. “The southern part is really old, has high topography and is very heavily cratered. Meanwhile, the northern region is volcanic, very low-lying and has comparatively few craters. The surface waves we detected helped us learn more about the northern lowlands, which we’ve only been able to speculate about before.”

One popular theory behind this is that the crusts in the northern lowlands and southern highlands are composed of different materials. However, the researchers found that their initial results appear to disprove this idea, even suggesting the crust structures may be surprisingly similar at certain depths.

The team hopes that its research will continue to help scientists investigate similar mysteries and form better models of Mars as exploration continues.

This article is adapted from text provided by ETH Zurich.

In addition to Kim, Lekic and Schmerr, former UMD postdoctoral researcher Quancheng Huang (Ph.D. ’20) was a co-author of the study.

The study, “Surface waves and crustal structure on Mars,” was published in the journal Science on October 28, 2022.