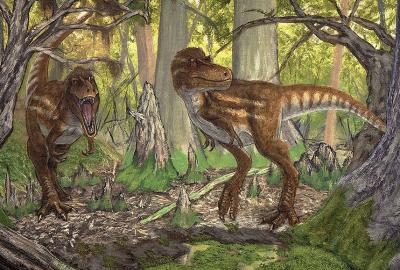 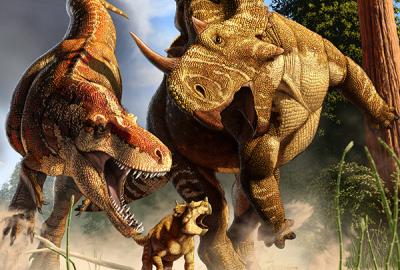 A UMD geology professor contributed to research that found insufficient evidence for the reclassification of the iconic T. rex

A new study refutes a provocative claim made earlier this year that fossils classified as the dinosaur Tyrannosaurus rex represent three separate species. The rebuttal, published today in the journal Evolutionary Biology and led by paleontologists at the American Museum of Natural History and Carthage College, finds that the earlier proposal lacks sufficient evidence to split up the iconic species.

“Tyrannosaurus rex remains the one true king of the dinosaurs,” said study co-author Steve Brusatte, a paleontologist at the University of Edinburgh who conducted his Ph.D. work at the museum. “Recently, a bold theory was announced to much fanfare: what we call T. rex was actually multiple species. It is true that the fossils we have are somewhat variable in size and shape, but as we show in our new study, that variation is minor and cannot be used to neatly separate the fossils into easily defined clusters. Based on all the fossil evidence we currently have, T. rex stands alone as the single giant apex predator from the end of the Age of Dinosaurs in North America.”

In March 2022, authors of the controversial study, also published in Evolutionary Biology, made the case that T. rex should be reclassified as three species: the standard T. rex, the bulkier “T. imperator” and the slimmer “T. regina.” The study was based on analysis of the leg bones and teeth of 38 T. rex specimens. The authors of the new study revisited the data presented in the earlier paper and also added data points from 112 species of living dinosaurs—birds—and from four non-avian theropod dinosaurs. They found that the multiple species argument was based on a limited comparative sample, non-comparable measurements and improper statistical techniques.

“The boundaries of even living species are very hard to define. For instance, zoologists disagree over the number of living species of giraffe,” said co-author Thomas R. Holtz, Jr., a principal lecturer in the University of Maryland’s Department of Geology. “It becomes much more difficult when the species involved are ancient and only known from a fairly small number of specimens. Other sources of variation—changes with growth, with region, with sex and with good old-fashioned individual differences—have to be rejected before one accepts the hypothesis that two sets of specimens are in fact separate species. In our view, that hypothesis is not yet the best explanation.”

James Napoli, co-lead author of the rebuttal study and a graduating doctoral student in the museum’s Richard Gilder Graduate School, echoed these sentiments.

“Their study claimed that the variation in T. rex specimens was so high that they were probably from multiple closely related species of giant meat-eating dinosaur,” Napoli said. “But this claim was based on a very small comparative sample. When compared to data from hundreds of living birds, we actually found that T. rex is less variable than most living theropod dinosaurs. This line of evidence for proposed multiple species doesn’t hold up.”

“Pinning down variation in long-extinct animals is a major challenge for paleontologists,” said co-lead author Thomas Carr from Carthage College. “Our study shows that rigorous statistical analyses that are grounded in our knowledge of living animals is the best way to clarify the boundaries of extinct species. In practical terms, the three-species model is so poorly defined that many excellent specimens can’t be identified. That’s a clear warning sign of a hypothesis that doesn’t map onto the real world.”

The original paper asserted that variation in the size of the second tooth in the lower jaw, in addition to robustness of the femur, indicated the presence of multiple species. But the authors of the new study could not replicate the tooth findings, and they recovered different results from their own measurements of the same specimens.

In addition, the authors of the new study took issue with how the “breakpoints” for each species using these traits were statistically determined. The statistical analysis in the original study defined the number of groups before the test was run, so it is not useful for testing the hypothesis, according to the authors of the new study. In the latest study, a different statistical technique was used to determine how many clusters exist within the data without any advanced assumptions, finding that they are best considered as a single group—in other words, one species: T. rex.

“T. rex is an iconic species and an incredibly important one for both paleontological research and communicating to the public about science, so it’s important that we get this right,” said co-author David Hone, from Queen Mary University of London. “There is still a good chance that there is more than one species of Tyrannosaurus out there, but we need strong evidence to make that kind of decision.

This article is adapted from text provided by the American Museum of Natural History.

The research paper, “Insufficient Evidence for Multiple Species of Tyrannosaurus in the Latest Cretaceous of North America: A Comment on ‘The Tyrant Lizard King, Queen and Emperor: Multiple Lines of Morphological and Stratigraphic Evidence Support Subtle Evolution and Probable Speciation Within the North American Genus Tyrannosaurus,’” was published in Evolutionary Biology.