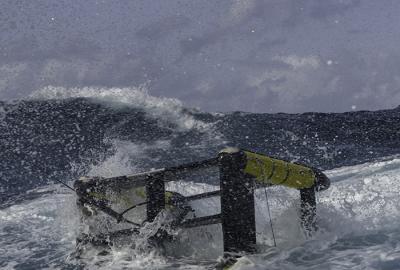 First Direct Evidence of Ocean Mixing Across the Gulf Stream
University of Maryland researcher discovers important ocean blender effect that may influence climate and fisheries from Florida to Newfoundland.

In the late 19th and early 20th centuries, German scientists and surveyors crossed choppy waters and braved dangerous conditions on ships called the Gazelle, Valdivia and Planet. These arduous expeditions, one of which circumnavigated the globe, yielded several discoveries—including the first documented vampire squid—at a time when little was known about life in the deep sea.

­Though these early researchers were mostly interested in marine biology, some of their “cruise reports” also contained measurements of subsurface temperatures in the Indian Ocean. These long-overlooked data sets from 1874 to 1907 were revisited more than a century later, sparking new research with important climate implications.

A team led by atmospheric and oceanic scientists at the University of Maryland studied the water temperature data from these three expeditions, digitizing the information and putting it in a modern context to offer a new perspective on ocean warming.

Their analysis—published online on June 25, 2022, in the journal Geophysical Research Letters—determined that interior temperature changes in the Indian Ocean were limited in the late 19th and early 20th centuries. These findings are consistent with other global records, which show that ocean warming only began to accelerate in the last half of the 20th century, largely due to human-caused climate change.

Jacob Wenegrat, the paper’s lead author, said these historical measurements fill holes in the research community’s understanding of how much and how deep the Indian Ocean warmed throughout history.

“The modern observational record of subsurface ocean temperatures only goes back to about 1960,” said Wenegrat, an assistant professor in atmospheric and oceanic science at UMD. “We’ve had this gap in century timescale observations for the Indian Ocean. At the same time, particularly in the last decade or two, the role that the Indian Ocean plays in global climate systems has become even clearer.”

Of all the heat the global ocean has taken on since 1990, the Indian Ocean absorbed a quarter of it, helping to slow the rate of global surface air-temperature increases and mitigate climate change. This has come at a cost, though. It is one of the fastest-warming oceans, which in many cases leads to the loss of biodiversity and rising sea levels.

The region is also home to a third of the global population, with millions of people relying on fisheries and rain-fed agriculture for food. Monsoons, floods, droughts and weather patterns like El Niño are also heavily affected by warming patterns in the Indian Ocean, leading to natural disasters in many parts of the world.

“The Indian Ocean has taken up a significant amount of heat in the climate system, so even though it’s a pretty small basin, it seems to have this outsized impact on global climate,” Wenegrat said.

For these reasons and more, the researchers set out to uncover how subsurface temperatures in the Indian Ocean—measured by German crews over a century ago—fit into global records of ocean warming.

In the process, they encountered some unique challenges. They first needed to translate the cruise logs from their original German into English. Historian Ursula Rack from the University of Canterbury in New Zealand helped contextualize the translated text, explaining what types of measuring tools and equipment were used throughout the three expeditions.

The researchers accounted for any temperature readings that could be inaccurate due to equipment limitations. This included mercury thermometers that were vulnerable to errors from the compression of the mercury at greater depths, as well as hemp lines that were easily stretched by heavy equipment and swayed by currents, potentially affecting the depth at which measurements were recorded. Some of the temperature readings could not be analyzed for these reasons, but the researchers noted that other errors in these century-old measurements would not have qualitatively affected their conclusions.

Wenegrat’s team digitized data from these expeditions, and in doing so, made this historical information available to other researchers trying to unravel the complexities of ocean warming. Wenegrat said this study also gave him a greater appreciation of the challenge—and value—of making data accessible to current and future scientists.

“There’s a lot of focus right now in ocean sciences on data reproducibility and data sharing, but it’s often thought of in relatively short time scales—you want someone to be able to reproduce your work five years or a decade from now,” Wenegrat said. “It’s incredible that we were able to pick up this data a century after it was taken and use it for purposes that were certainly not anticipated by the scientists who collected it.”

This research was supported by the National Science Foundation (Award No. OCE 82280500). This story does not necessarily reflect the views of this organization.

Their paper, titled “A century of observed temperature change in the Indian Ocean,” was published in Geophysical Research Letters on June 25, 2022.

The College of Computer, Mathematical, and Natural Sciences at the University of Maryland educates more than 9,000 future scientific leaders in its undergraduate and graduate programs each year. The college's 10 departments and more than a dozen interdisciplinary research centers foster scientific discovery with annual sponsored research funding exceeding $200 million.