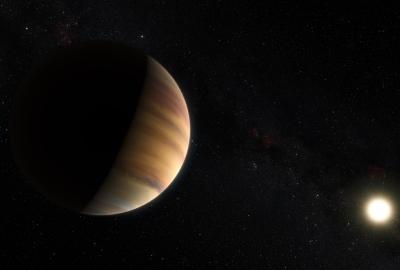 UMD Named a Host Institution for Prestigious Planetary Science Postdoctoral Fellowship
Through the Heising-Simons Foundation’s 51 Pegasi b Fellowship, postdoctoral researchers will have the chance to probe the mysteries of the universe at the University of Maryland.

Professor Andrew Harris has been reappointed chair of the University of Maryland’s Department of Astronomy for a five-year term, effective July 1, 2022.

"I look forward to seeing how Andy builds on his first term as chair to grow and strengthen our research and education programs in astronomy and take them to the next level," said Amitabh Varshney, dean of UMD’s College of Computer, Mathematical, and Natural Sciences.

Harris, who joined UMD in 1997, will continue to lead the department, which has over 150 tenured/tenure-track and professional-track faculty members, nearly 150 students and annual research funding of nearly $40 million.

“I am honored to be able to continue to help the Department of Astronomy move forward,” Harris said. “Our department is exciting, always boiling with ideas and activity. The pandemic has had a huge impact on how we teach, work and interact. As we adapt to living with the virus, I am looking forward to working with everyone to bring back our close sense of community after the disruptions and lessons from the pandemic.”

The department also strengthened its research facilities through improved access to UMD’s supercomputer, a renewal of its partnership in the Lowell Discovery Telescope and the pursuit of radio telescope access.

In his personal research, Harris seeks to understand the energetics and physical conditions within galaxies and their nuclei. Part of this effort involves developing instrumentation for radio observations over wide bandwidths and wide fields of view at the Green Bank Observatory and other sites. Harris’ work also involves spectroscopy of individual high-redshift galaxies and of the integrated molecular emission from clusters of galaxies.

Closer to home, Harris uses data from the Herschel Space Telescope and the Stratospheric Observatory for Infrared Astronomy (SOFIA) airborne observatory to probe our galactic center, to understand the physical conditions in this complex region and to extrapolate these observations to more distant galaxies.

Since joining UMD in 1997 as an associate professor, Harris has served on the University Senate, where he sat on the Executive Committee and served two terms as chair of the Programs, Curricula, and Courses Committee. In 2010, he was also named an affiliate professor in the UMD Department of Electrical and Computer Engineering. He has been a visiting scientist at the University of Cologne in Germany, the National Radio Astronomy Observatory, and the California Institute of Technology. Harris is a member of the American Astronomical Society, the International Union of Radio Science and IEEE.