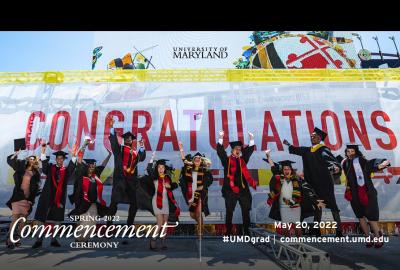 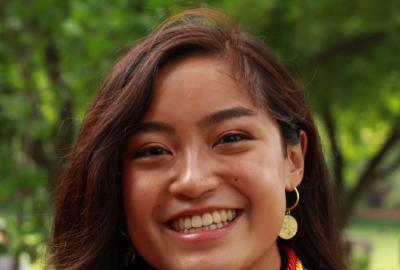 “Funny enough, I found out about Maryland through my marching band in high school,” said Adam, who was one of the few women in her New Jersey high school’s drum line. “We were touring different campuses, and we had the opportunity to visit Maryland. I was a freshman in high school, and I liked the feeling that Maryland gave me.”

Today, she is getting ready to graduate from UMD with a double degree in biological sciences and Spanish and a citation from the Integrated Life Sciences program in the Honors College. She will take with her a list of accomplishments that could have long-term benefits for science and community health.

Adam’s achievements sometimes surprise even her. When she started at Maryland, Adam didn’t know exactly where her studies would take her, but, she said, “I wanted to kind of focus more on exploring research.”

One of those explorations would take place in outer space. In 2019, an experiment designed by Adam and four classmates was sent to the International Space Station. The experiment examined bacteria’s ability to grow on different surfaces in microgravity. The samples were returned to Earth and the team is analyzing them in a lab on campus.

“This experience was my first real encounter with independent and collaborative research,” Adam said. “It was insightful and critical in shaping my understanding of what it means to be a part of a supportive scientific community. Working with other like-minded women peers was really exciting.”

In UMD’s Neural Systems Laboratory, Adam has been studying something a little more down-to-earth since her freshman year.

“We’re exploring auditory behavior in ferrets,” Adam said. “We're doing behavioral studies with them, exploring if they can discriminate sounds. They are extremely intelligent, a really great model for auditory processing. I am a language and biology major, and I think that lab allowed me to unify both worlds.”

Adam’s project that will likely leave the most lasting mark on campus and the community is a kidney disease awareness program she created with biological sciences major Swarnapali Keppetipola. Co-founders of UMD’s chapter of the Kidney Disease Screening and Awareness Program, Adam and Keppetipola worked with School of Public Health Lecturer Kendall Bustad to develop a one-credit course on chronic kidney disease through the Student Initiated Courses (STICs) program. Often called ‘the silent killer,’ because it can go undetected until it’s too late, chronic kidney disease is more common in minority communities.

They hoped to raise awareness in the local community with kidney health screening events. Then the pandemic hit, restricting in-person events.

“We were able to pivot and create spaces like kidney health workshops,” Adam said. “Currently, we're working with the American Society of Nephrology, and they're helping us find nephrologists for coffee chat conversations, things that can work within a virtual space.”

Even after being diverted by COVID-19, Adam looks on the experience as a plus.

“I think being open to change is really important because things are not always going to go as you intend,” she said. “It's not a straightforward process. It's not like you go on one path and you keep going on that path. No, it branches in all directions, almost like a tree.”

As the daughter of Haitian immigrants, Adam also understands the challenges faced by minority and immigrant communities.

“My parents immigrated here in search of finding a better life for their children,” she said.

Adam’s father had been a doctor in Haiti, but his career was upended when they came to America.

“I remember having a conversation with my father in high school, and it was actually centered on an American dream project that our English teacher then was having us explore. And I think it was in that conversation that I really kind of got to understand the difficulties and the experiences that my father underwent to have a life here and to pursue his interests,” she said. “He had to kind of become a doctor all over again. When he came here, he had to do small-time jobs like work in restaurants and as a security guard, just so that he can get enough funds to reapply and take the exam before finally gaining his license to work here. It was very inspirational for me to hear his efforts in pursuing his dreams.”

Adam will pursue her own dream of becoming a doctor, like her father, after she graduates.

“It's my hope that I will be able to join academic medicine and pursue my interests in community outreach. The kidney disease screening and awareness program really helped me to understand the importance of reaching out to the local community partners,” Adam said. “I also want to engage in research, because I feel like our efforts in medicine are solidified by understanding what's going on in research and innovation.”

Adam’s career goals came into focus through her experiences at Maryland.

“I truly am grateful that I selected Maryland,” she said. “There are so many different spaces on campus and so many opportunities for research and for funding. And that's really vital because if you have ideas, you need areas that can help them grow.”

Adam also plans to give back and mentor younger women and minorities in the future.

“I got into college because I was a part of mentorship spaces like the National Coalition of 100 Black Women. I want to continue that process,” she said. “You have to help others just like you were helped.”