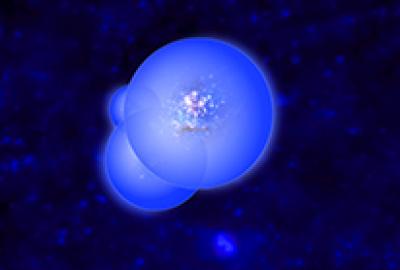 UMD-led study traces the movement of 10,000 galaxies and clusters of galaxies for 11.5 billion years

The research team’s study, which follows the dominant congregations of matter within 350 million light-years, is accepted for publication in The Astrophysical Journal. Using the same method, the team also projected future galaxy movements, predicting galaxy expansions and mergers 10 billion years into the future.

“We are bringing into focus the detailed formation history of large-scale mass structures in the universe by reverse-engineering the gravitational interactions that created them,” said Ed Shaya, the study’s lead author and an associate research scientist in UMD’s Department of Astronomy.

The researchers used a mathematical technique called numerical action method to compute the paths based on galaxies’ current brightness, position and motion. They factored in the physics of the Big Bang theory, including the idea that galaxies initially start out expanding from each other almost precisely at what is called the Hubble expansion rate. Over time, gravity alters galaxy motions, so they are not just moving apart as the universe expands, but are drawn together into filaments, walls and clusters, while also emptying out other regions that are now voids. Over the eons of time, galaxies typically deviate from pure Hubble expansion by millions of light-years over a billion years. In regions of high density, the galaxy orbits can become quite complicated and involve collisions and mergers.

The researchers explored several particularly interesting vast regions of high matter and galaxy density. One, which has been called “the Great Attractor,” is the core of the Laniakea Supercluster, an immense supercluster of galaxies containing our own Milky Way. Galaxies can be seen flowing toward a location within a nest of four rich clusters.

The closest cluster of galaxies, the Virgo Cluster, and galaxies in its vicinity, could also be seen and studied in great detail. The astronomers identified a fascinating region in the adjacent Perseus-Pisces filament of galaxies, which stretches for nearly a billion light-years and is one of the largest known structures in the universe.

“For more than 30 years, astronomers have considered a ‘Great Attractor' to be the primary source of gravity that makes our home Milky Way Galaxy move with a high peculiar velocity relative to uniform cosmic expansion, but the nature of that source has been obscure. Our orbit reconstructions have provided the first good look at this previously enigmatic region,” explained study co-author R. Brent Tully, an astronomer at the University of Hawai’i Institute for Astronomy and UMD alum (Ph.D. ’72, astronomy).

Using the same technique, the researchers can project galaxy movements into the future. They found that the accelerating expansion of the universe dominates the overall picture, causing most galaxies to move apart. However, some coalescence and merging will continue in localized regions.

The researchers created a video of the paths of galaxies in this vast region, starting from the epoch of early galaxy formation and continuing until the universe is almost twice as old. On the large scales depicted in this simulation, only a few major mergers, all in very dense regions, occur in the next 10 billion years.

The technical article is accompanied by four videos and four interactive models.

This article is adapted from text provided by the University of Hawai’i.

This work was supported by funding for the Cosmicflows project that was provided by the U.S. National Science Foundation (Award No. AST09-08846), NASA (Award No. NNX12AE70G), and multiple awards to support observations with Hubble Space Telescope through the Space Telescope Science Institute. This story does not necessarily reflect the views of these organizations.

The research paper, “Galaxy flows within 8,000 km/s from numerical action methods,” Edward Shaya, R. Brent Tully, Daniel Pomarède, Alan Peel, is accepted for publication in The Astrophysical Journal and a preprint is available at https://arxiv.org/abs/2201.12315.