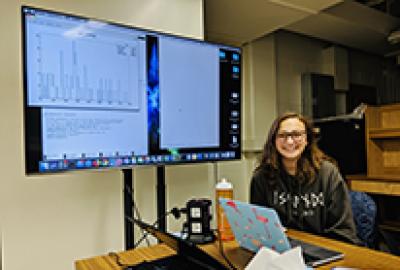 University of Maryland Professors Sarah Eno and Leslie Pick have been named 2021 Fellows of the American Association for the Advancement of Science (AAAS).

The honor of being elected Fellow of AAAS began in 1874 and is acknowledged with a certificate and rosette, presented at the annual Fellows Forum at the AAAS Annual Meeting, scheduled this year for February 19, 2022.

Eno was cited for “leadership and research in both detector and analysis development, enabling the discovery of the top quark and Higgs boson, and the search for new phenomena at high energy colliders.”

“I am truly humbled that AAAS has decided my accomplishments are worthy of this honor,” Eno said. “My work was enabled by the wonderful collaborations in which I worked and my wonderful colleagues and students here at the University of Maryland.”

Eno’s research has focused on precision studies of the properties of the W boson, tests of quantum chromodynamics using Z bosons and searches for exotic particles predicted by theories of physics beyond the Standard Model. Other efforts have included improvement and simulations of calorimeters to better study the momentums of jets and of missing transverse energy, and studies of radiation damage in plastic scintillators.

“Sarah Eno is widely known as a leader in high energy physics, and this recognition from the AAAS befits her extensive career achievements,” said Steve Rolston, chair of the Department of Physics.

Eno received her bachelor's degree from Gettysburg College and her Ph.D. from the University of Rochester for work on the AMY experiment in Tsukuba, Japan. She then accepted a postdoctoral appointment at the University of Chicago’s Enrico Fermi Institute, working on the Collider Detector at Fermilab (CDF) experiment. In 1993, Eno joined UMD as an assistant professor and moved to the DØ experiment at Fermilab. The discovery of the top quark—announced by the CDF and DØ teams in 1995—was a milestone in particle physics. Eno’s precise measurement of the decay width and mass of the electroweak W boson helped predict the mass of the top quark.

Since 1999, Eno has worked on the Compact Muon Solenoid (CMS) experiment of the Large Hadron Collider at CERN. In 2012, CERN announced experimental verification of the Higgs boson, and the 2013 Nobel Prize in Physics was awarded to François Englert and Peter W. Higgs, whose 1960s calculations determined that mass could not exist without the presence of such a particle. Since 2020, she has participated in the development of experiments for a potential new electron-positron collider at CERN (called FCC-ee).

Eno’s accolades include selection as an Outstanding Junior Investigator by the U.S. Department of Energy in 1995 and an Alumni Achievement Award from Gettysburg College in 1999. She is a Fellow of the American Physical Society (APS) and a UMD Distinguished Scholar-Teacher. She has also been cited by the APS as an outstanding referee for exceptional work in the assessment of manuscripts.

Pick is being honored for “distinguished contributions to the fields of evolutionary developmental biology (evo devo) and insect biology, particularly the role of Hox genes in embryogenesis and organismal diversification.”

“I feel very honored to receive this recognition,” Pick said. “I am very much in awe of the generosity of one of my colleagues at a different university who reached out to me and said he would like to nominate me for this. That means a great deal to me.”

Pick and her team conducted laboratory experiments testing the hypothesis that Hox genes are tied to similar functions in animals as different as mice and flies. This work contributed to the understanding that Hox genes, first identified in the fruit fly, have been evolutionarily conserved as those animals evolved through hundreds of millions of years. This work provided a striking demonstration that fruit flies can be used as models for humans in many types of biological studies because they share many of the same genes.

Pick and her trainees also discovered that one particular Hox gene violated the rules of conservation because it changed dramatically over time. This finding led to current studies of how regulatory genes, which are critical for survival, can be gained and lost during evolution.

Pick came to UMD in 2003 and became chair of the Department of Entomology in 2013. She was awarded the Distinguished Scholar-Teacher award in 2015 for her contributions to research and teaching in the field of genetics.

Pick has published numerous peer-reviewed research papers, including publications in high-impact journals such as Science, Nature, Current Biology, and Proceedings of the National Academy of Sciences. Her work has been funded by federal agencies and private foundations, including the National Science Foundation, March of Dimes, U.S. Department of Agriculture and National Institutes of Health. Pick is a member of the Genetics Society of America and fellow of the Entomological Society of America. She earned a dual bachelor’s degree in psychology and biology from Wesleyan University and a Ph.D. in biochemistry from the Albert Einstein College of Medicine.

Kimbra Cutlip contributed to this article.