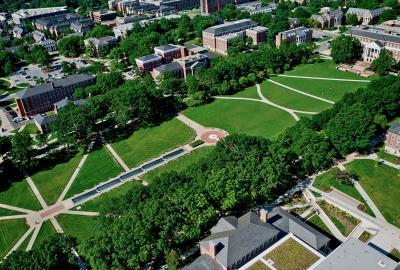 Cell “Quakes” May Help Cells Respond to the Outside World

Animal cells get their structural integrity from their cytoskeleton, a shapeshifting mesh of filaments inside a cell that helps the cell organize its structure and communicate with its environment. A few years ago, scientists noticed that parts of the cytoskeleton would occasionally rearrange very rapidly, causing an earthquake-like disturbance in part of the cell. They named these disturbances cytoquakes, but no one understood how or why they happened.

New computer simulations developed by University of Maryland researchers reveal that these cytoquakes are caused by the slow buildup and sudden release of mechanical energy within the cell. The researchers believe the quakes may help the cell respond rapidly to signals from the outside environment, like chemicals produced by other cells or hormones in the bloodstream.

The research appears in the October 4, 2021, issue of the journal Proceedings of the National Academy of Sciences.

“Cytoquakes represent a sudden remodeling of a very important component of the cell, but the physics behind them really wasn’t known,” said Garegin Papoian, a co-author of the study who is the Monroe Martin Professor of Chemistry and Biochemistry with a joint appointment in the Institute for Physical Science and Technology at the University of Maryland. “We think these cytoquakes must be biologically important because the cytoskeleton is involved in so many functions within the cell. Understanding the physics behind them can provide insight into how cells work.”

The cytoskeleton is like an internal scaffolding within animal cells. It is made of a network of filaments that constantly grow, shrink, attach and detach from one another. In addition to providing structure to a cell, the filaments also serve as tracks for chemical signals to flow from one part of a cell to another.

Papoian and his colleagues hypothesized that the sudden rapid restructuring that happens in cytoquakes was the result of the cytoskeleton’s physical structure being particularly sensitive to its environment. He likens it to the sensitivity of a pile of sand compared with a brick. Both may be made of the same molecules, but the brick holds its structure, even under pressure, without collapsing. The pile of sand may hold its structure for a long while but then suddenly collapses into an avalanche of sliding sand.

To test the hypothesis, the team created a computer simulation of a model cytoskeleton using a pioneering active matter simulation software that they developed called MEDYAN for “mechanochemical dynamics of active networks.” The software applies the laws of chemistry and physics to determine how the molecules within the cytoskeleton interact and behave.

The study revealed that the filaments in a cytoskeleton arrange themselves a bit like a shape-shifting tensegrity structure. In the macroscopic world, a tensegrity structure is a kind of geometric toy or sculpture made of cables and floating rods under tension and compression that appear to defy gravity. Analyzing these cellular tensegrity structures helped Papoian and his colleagues understand tension release within the cytoskeleton. They found that tension applied to one area of the structure can build and cause tension until it suddenly releases in another area. In other words, the cytoskeleton behaves more like a pile of sand than a brick.

The physical structure of the cytoskeleton allows tension to build between some of the filaments like the tension between grains of sand in a sand pile or between two tectonic plates along a fault line. When some threshold is met, the tension suddenly releases, the pile of sand collapses, an earthquake rumbles or a cytoquake occurs.

“We postulate that the cytoquake mechanism poises the cell to react quickly to external signals from its environment compared to a system without this mechanism,” Papoian said.

For example, if a cell involved in repairing injuries must rush to the site of a wound, the cytoquake mechanism may respond to chemical signals from the injury site by jolting the cell into motion. When a cell migrates through the body, the leading edge may also use this mechanism to project or collapse protrusions as the cell probes its local neighborhood.

The team’s next step will be to expand on their simulation methods to include more parts of a cell such as the nucleus. They recently simulated the outer membrane of a cell and analyzed how the cytoskeleton pushes against this membrane to form finger-like protrusions.

“This work is showing us that we can use MEDYAN to model important components of a cell,” Papoian said. “Ideally, we would like to keep going and essentially build the fundamental model of a whole cell at single molecule resolution.”

Additional co-authors of the study from UMD include Carlos Floyd (Ph.D. ’21, biophysics) and Distinguished University Professor of Chemistry and Biochemistry Christopher Jarzynski.

The research paper, “Understanding cytoskeletal avalanches using mechanical stability analysis,” Carlos Floyd, Herbert Levine, Christopher Jarzynski, and Garegin A. Papoian, was published on October 4, 2021, in the Proceedings of the National Academy of Science.