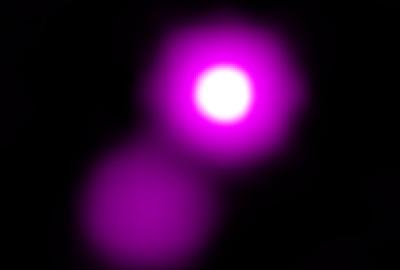 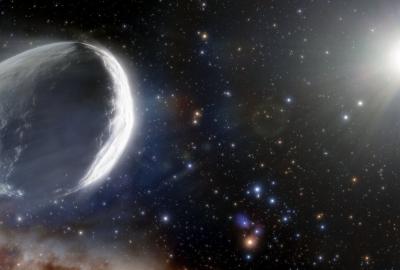 NASA’s Fermi Gamma-ray Space Telescope detected a pulse of high-energy radiation on Aug. 26, 2020 that had been racing toward Earth for nearly half the age of the universe. Lasting less than a second, it turned out to be one for the record books—the shortest gamma-ray burst (GRB) caused by the death of a massive star ever seen.

GRBs are the most powerful events in the universe, detectable across billions of light-years. Astronomers classify them as long if the event lasts for more than two seconds. They observe long bursts in association with supernova, explosions caused by the implosion of massive stars, while short bursts are thought to be the result of a merger between two neutron stars.

Although this new GRB was merely 0.6 seconds long, analyses of the afterglow and the emerging light of the supernova that followed led an international team of scientists to conclude the GRB came from a collapsing star, not a merger. The finding indicates that classifying GRBs based solely on duration may not be an accurate approach, and that additional observations are needed to determine their cause. The research was published on July 26, 2021, in the journal Nature Astronomy.

“This discovery presents the shortest gamma-ray emission caused by a supernova during the collapse of a massive star,” said the study’s lead author, Tomás Ahumada (M.S. ’20, astronomy), an astronomy Ph.D. candidate at the University of Maryland and a researcher at NASA’s Goddard Space Flight Center. “We think this event was effectively a fizzle, one that was close to not happening at all. Even so, the burst emitted 14 million times the energy released by the entire Milky Way galaxy over the same amount of time, making it one of the most energetic short-duration GRBs ever seen.”

The discovery could help explain an astronomical mystery. Long GRBs are associated with a specific type of supernova. However, astronomers observe many more of these supernovae than long GRBs. The new discovery suggests that some observations of short-duration GRBs may actually be caused by collapsing stars.

When a star much more massive than the sun runs out of fuel, its core collapses and forms a black hole. As matter swirls toward the black hole, some of it escapes in the form of two powerful jets that rush outward at almost the speed of light in opposite directions. Each jet drills through the star, producing a gamma-ray signal that can last for minutes as the stream breaks out of the star and interacts with the surrounding gas. Astronomers detect a GRB when one of these jets happens to point almost directly toward Earth. Following the burst, the disrupted star then rapidly expands as an exploding supernova, which is exactly what researchers saw following the GRB detected on Aug. 26, 2020.

“If the burst was caused by a collapsing star, then once the afterglow fades away it should brighten again because of the underlying supernova explosion,” said Leo Singer, an adjnuct assistant professor at UMD and astrophysicst at NASA Goddard Space Flight Center who is Ahumada’s research advisor. “But at these distances, you need a very big and very sensitive telescope to pick out the pinpoint of light from the supernova from the background glare of its host galaxy.”

Ahumada and his colleagues used a very sensitive instrument called the Gemini Multi-Object Spectrograph on the 8.1-meter Gemini North telescope in Hawaii to obtain images of the GRB’s host galaxy 28, 45 and 80 days after the GRB was detected.

“This was a complicated endeavor as we needed to separate the light of an already faint galaxy from the light of a supernova,” said Ahumada, who is supported by the Center for Research and Exploration in Space Science & Technology II, a collaboration between NASA's Goddard Space Flight Center and five universities led by UMD. “Gemini is the only ground-based telescope that can do follow-up observations like this with a flexible-enough schedule to let us squeeze in our observations.”

The team believes that some long GRBs may appear short because the jets of gamma rays that emerge from the collapsing star aren’t strong enough to completely escape the star—almost failing to produce a GRB—and that other collapsing stars have such weak jets that they don’t produce GRBs at all.

Watch a short NASA video on this research:

This work is supported by NASA (Award No. 80GSFC21M0002), the Joint Space Science Institute and the Center for Research and Exploration in Space Science &Technology II. This story does not necessarily reflect the views of these organizations.

The research paper, Discovery and Confirmation of the Shortest Gamma-ray Burst from a Collapsar, was published on July 26, 2021, in the journal Nature Astronomy.