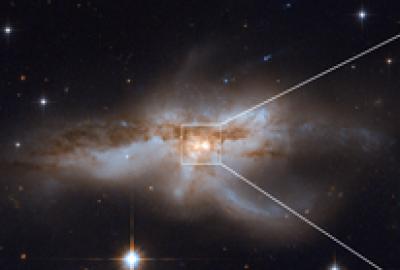 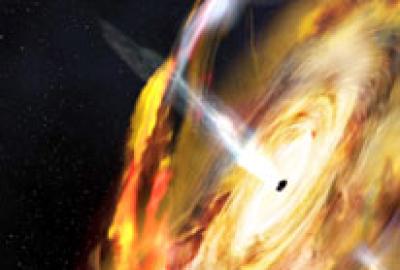 The Milky Way and many other galaxies in the universe formed through collisions and mergers with other galaxies. These collisions determine the shape and composition of the resulting galaxy and trigger the formation of stars and new black holes. But they are violent, high-energy events that can be difficult to study. Untangling what happens when galaxies merge helps scientists understand the forces that shape the universe.

This new finding, led by University of Maryland astronomy graduate student Jonathan Williams, provides a unique opportunity to study multiple galactic interactions in great detail. Williams will present the analysis of this three-galaxy system on June 8, 2021, at the 238th meeting of the American Astronomical Society.

“What’s exciting about this find is that it combines multiple phenomena in one system,” Williams said. “This gives us an opportunity to understand the dynamics of each of these systems and their interaction in much better detail than ever before.”

In addition to providing insight into what happens when galaxies collide, the finding provides a rare glimpse into a merger involving at least one, and possibly two, AGN. In recent years, astronomers have been able to observe black hole mergers with increasing frequency. But most often, such observations have involved smaller black holes, not the supermassive AGN found at the center of galaxies.

"The ability to study a triple merger with at least one AGN in such detail is truly amazing,” said UMD Astronomy Professor Richard Mushotzky, a co-author of the study. “This find can reveal details about how active galaxies might be triggered and serve as a guide to understanding how supermassive black holes might come together and merge.”

The southernmost galaxy in the system appears to be a Seyfert galaxy, a class of galaxies with a swirling disc of material that is falling inward toward an AGN. The second galaxy in the new system may belong to a class of galaxies called LINER galaxies, which stands for low-ionization nuclear emission-line region. Shaped like spirals or discs, LINER galaxies are not as bright as Seyfert galaxies, but many astronomers believe they also contain AGN at their cores.

The third galaxy in the system appears to be a dwarf galaxy traveling on a path perpendicular to Earth’s line of sight. Unlike galaxies traveling toward or away from Earth, this galaxy left a visible trail of dust and gas that can serve as a sort of timeline that scientists can use to reconstruct what happened along its journey.

According to Williams, the data from both the Seyfert and LINER galaxies are not straightforward, with each showing some characteristics that are more common in other types of galaxies. Through further analysis, Williams hopes to understand what these mixed signals mean and the different processes going on as these galaxies interact.

“Merging galaxies are messy, and there is just so much going on in this system,” Williams said, “but because of the trail of dust and gas from that dwarf galaxy, we have a fair amount of information about what has happened as these systems have interacted. And there is much more to do as we puzzle out what is happening and how everything is moving in this system.”

To conduct the study, Williams analyzed radiation emitted from the system across multiple spectra. He studied radio wave emissions collected by the Atacama Large Millimeter/submillimeter Array in Chile and the Very Large Array Radio Telescope facility in New Mexico. He analyzed optical and near-infrared radiation collected by the European Southern Observatory in Chile and the W. M. Keck Observatory in Hawaii, respectively, as well as observations from the satellite-based Chandra X-ray Observatory.

Williams plans to add data from the Hubble telescope to future analyses of the triple galaxy merger.

“The more we can learn about what’s going on and understand what becomes of these systems as they interact, the better we can identify these events in the future and understand the forces that created the galaxies we see in the universe today,” Williams said.

This work was supported by the BAT AGN Spectroscopic Survey collaboration. Research by Jonathan Williams was supported by the National Science Foundation Individual Development Program. The content of this article does not necessarily reflect the views of these organizations.

The presentation, “A Merging Galaxy Triple Hosting a Potential Dual Active Galactic Nucleus,” will be presented on June 8, 2021, at the annual meeting of the American Astronomical Society, which will be held virtually.