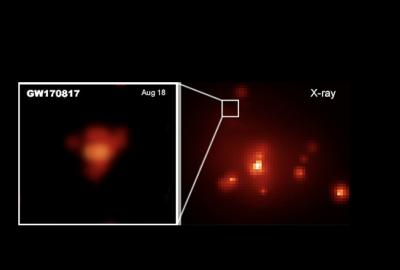 Inside a neutron star, conditions like density, gravity and magnetic fields are more extreme than anywhere in the universe outside of black holes. The conditions are so unlike those on Earth that scientists are not entirely sure what form matter takes inside neutron stars, which are dense remnants of collapsed giant stars. But a global collaboration, part of which is led by University of Maryland Astronomy Professor Cole Miller, has discovered that the matter in the core of the most massive known neutron star is less ‘squeezable’ than some physicists predicted.

The finding is based on observations made by NASA’s Neutron star Interior Composition Explorer (NICER)—an X-ray telescope on the International Space Station—of the binary star system PSR J0740+6620 (J0740 for short), which is over 3,600 light-years away in the northern constellation Camelopardalis.

The new finding, which resulted in precise measurements of the star’s radius, is forcing scientists to reconsider previous assumptions about the matter inside neutron stars. Miller and members of the NICER team presented their findings on April 17, 2021, at a virtual meeting of the American Physical Society.

“Our new measurements of J0740 show that even though it’s almost 50% more massive than J0030, it’s essentially the same size,” said Anna Watts, a professor of astrophysics at the University of Amsterdam who worked on the study. “That challenges some of the more squeezable models of neutron star cores, including versions where the interior is just a sea of quarks. J0740's size and mass also pose problems for some less squeezable models containing only neutrons and protons.”

Neutron stars form when a massive dying star at least eight times the sun’s mass runs out of fuel in its core, collapses under its own weight and bursts into a supernova. Heavier stars leave behind black holes. Lighter stars give birth to neutron stars, which pack more mass than the sun into a sphere that measures about the diameter of the Capital Beltway.

Scientists think neutron stars are layered a bit like golf balls. At the surface, a thin atmosphere of hydrogen or helium rests on an iron crust. Below that, the immense pressure has broken atoms into their building blocks and transformed them into a sea of mostly neutrons packed together at up to twice the density of the nucleus of an atom. Deeper in the core, scientists do not know what form matter takes.

In some models, the pressure breaks the bonds between the tiny particles, called quarks, that make up neutrons, and the core becomes a more “squeezable” mass of quarks floating freely or in new combinations. Such models predict that neutron stars with high masses will have significantly smaller diameters than low-mass neutron stars, because as mass increases, pressure increases and ‘squeezes’ the core to a smaller size. But the new findings suggest that may not be the case.

Scientists don’t know exactly what this means yet, but according to Miller, it could be that neutron star cores are made of a mix of intact neutrons and free quarks that vary from star to star. Or perhaps there is something else at work.

“What we know is that this new data is forcing physicists to rethink the physics inside neutron stars,” Miller said.

This story was adapted from text written by Jeanette Kazmierczak and provided by NASA’s Goddard Space Flight Center.
Watch a video about this work on NASA's website.

In addition to Miller, Alexander J. Dittmann, a UMD astronomy graduate student contributed to this research.