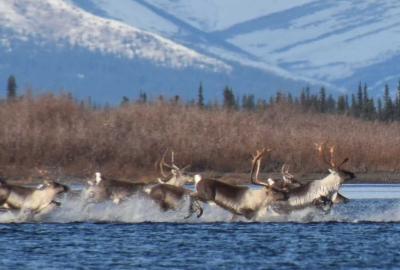 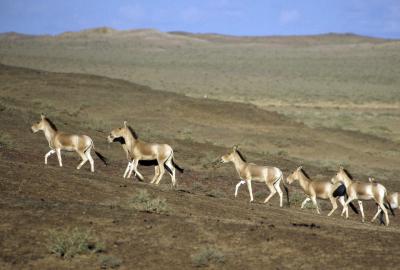 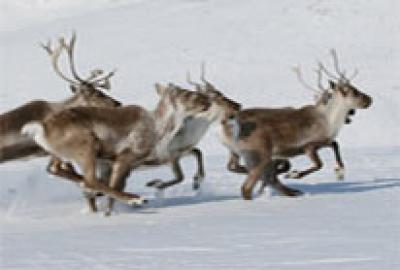 A Data Desert in the Arctic and Subarctic Forests Is Hindering Efforts to Study how Wildlife is Adapting to Climate Change
Scientists make an urgent plea for better snow data to understand how changing snowscapes are affecting the animals that live in high Northern latitudes.

Using a new large-scale data archive of animal movement studies, an international team including University of Maryland biologists found that animals are responding in unexpected ways to climate change. The archive contains data from studies across the global Arctic and sub-Arctic, an enormous region that is experiencing some of the most dramatic effects of global warming, including animal declines.

After developing the archive, the researchers used it to conduct three case studies that revealed surprising patterns and associations between climate change and the behavior of golden eagles, bears, caribou, moose and wolves. This work demonstrates both the feasibility and importance of studying animal ecology on extremely large scales. A research paper describing the archive and case studies appears in the November 6, 2020, issue of the journal Science.

“I’m really excited about how this work shows what you can learn from comparing data across populations on a very large scale,” said Elie Gurarie, an associate research scientist in UMD’s Department of Biology and a co-author of the paper. “I would say this is an early example of what we might call global animal movement ecology. We’re increasing our ability to monitor the pulse of animal populations across the Earth and ask big picture questions about what it means.”

Large-scale monitoring of things like sea-surface temperature and global forest cover have revealed important information about the response of Earth’s systems to climate change and human activity. But big-picture trends in animal behavior have been difficult to study, in part because animal ecology is not traditionally studied across landscapes that span entire regions of the globe, and also because the necessary data are collected by a variety of agencies and jurisdictions and are therefore neither standardized nor easily accessible.

To address these issues, Gurarie and his collaborators spent years building relationships with scientists from national, regional and First Nations governments and research groups throughout the Arctic to convey the benefits of sharing data in a global repository that they call the Arctic Animal Movement Archive (AAMA). Currently, the archive includes contributions from researchers from over 100 universities, government agencies and conservation groups across 17 countries.

The archive includes data from 201 terrestrial and marine animal tracking studies representing more than 8,000 animals between 1991 and the present. Using this data, Gurarie and members of his lab analyzed the movements of more than 900 female caribou from 2000 to 2017. They found that the iconic long-distance migrating caribou are giving birth earlier in the spring, roughly tracking rates of warming. But among the non-migratory mountain and lowland woodland caribou only the northern sub-populations are showing similar changes. While the drivers of these differences remain a mystery, understanding their behavior is critical to anticipating how they will respond as the Arctic continues to warm and many populations continue to decline.

“It’s tricky to predict how these trends might impact populations,” Gurarie said. “On the one hand, it can be better to give birth earlier, as it gives the calves more opportunity to grow during the summer season. On the other hand, giving birth too early may mean you literally don’t have time to reach the optimal calving grounds. The ability to look at biological processes, like birth, at such a large scale, across populations and subspecies and over millions of square kilometers, is unprecedented for a species in such a remote and harsh environment. These results reveal patterns that we would not have suspected, and point to further lines of inquiry about everything from caribou evolution to their ability to adapt to environmental changes moving forward."

Data analysis tools Gurarie developed to study caribou were also used for another case study led by his collaborators.

In an analysis comparing movements of more than 100 golden eagles from 1993 to 2017, Scott LaPoint, a researcher from Columbia University who is now at Black Rock Forest Consortium, found that immature birds migrating north in the spring arrived earlier following mild winters, while adult birds did not. The timing shift for young birds varied in response to a large-scale climate cycle called the Pacific Decadal Oscillation, which is being affected by climate change. Such age-related behavior changes could only be seen through decades of movement data and may have implications for breeding success.

A third study by Peter Mahoney of the University of Washington looked at the movement speeds of bears, caribou, moose and wolves from 1998 to 2019. His study showed that species respond differently to seasonal temperatures and winter snow conditions. Those differences could influence species interactions, food competition and predator-prey dynamics.

The scientists expect that other researchers will continue to mine the AAMA for answers to pressing questions about whether and how animals are responding to a changing Arctic. Meanwhile, the resource continues to expand as more data comes in from currently tracked animals and more researchers add their studies.

“This work has given us a baseline to understand the large-scale picture so we can get a sense of how animals and environments are really interacting across species and across space as the environment changes,” Gurarie said.

The researchers invite participation at https://www.movebank.org/cms/movebank-content/arctic-animal-movement-archive.

Additional authors of the paper from UMD are Emma Grier (B.S. 2020 Biological Sciences, Environmental Sciences and Policy) and Ophélie Couriot a post-doctoral associate at the Socio-Environmental Synthesis Center (SESYNC).

This work was supported by NASA ABoVE Animals on the Move (Award Nos. NNX15AU20A and NNX15AW71A). Gurarie’s work was also supported by the National Science Foundation (Award Nos. 1853465, 1915347). The content of this article does not necessarily reflect the views of these organizations.

The research paper, "Ecological insights from three decades of animal movement tracking across a changing Arctic," appears in the November 6, issue of the Journal Science.