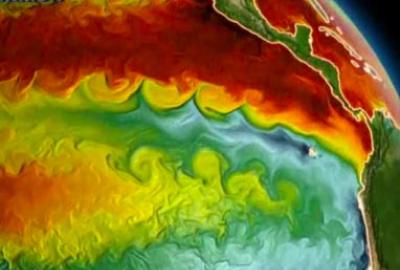 Researchers Develop First Mathematical Proof for a Key Law of Turbulence in Fluid Mechanics
UMD mathematicians provide a mathematical explanation for a previously uncertain law of physics, revealing when the law applies and when it doesn’t.

Laying Down the Laws

Jacob Bedrossian isn't intimidated by the impossible. The University of Maryland professor of mathematics earned his Ph.D. less than a decade ago, but he has already tackled two major projects that mathematicians said couldn't be done. By proving them wrong, Bedrossian and his collaborators established new frameworks that could eventually solve some of the most difficult challenges in physics—understanding turbulence.

Bedrossian studies stability and mixing in fluids and plasmas, which can be thought of as gases made up of charged particles. Much of his recent research focuses on turbulence, which can be seen in the chaotic flow of air in a billowing cloud or the eddies swirling in a flowing stream. Although turbulence is most often considered a phenomenon best understood through empirical laws of physics, Bedrossian sees turbulence as a mathematical question. Well, many, many mathematical questions, actually.

Last December, Bedrossian and UMD postdoctoral fellows Alex Blumenthal and Samuel Punshon-Smith (Ph.D. '17, applied mathematics and statistics, and scientific computation) presented the last part of a nearly 200-page mathematical proof to explain one small, but fundamental, law that physicists use when describing turbulence. The work, which described Batchelor's law, was a first step toward proving that turbulence, and perhaps other aspects of chaotic systems, can be explained by rigorous mathematics.

Although physicists have long used mathematical equations to describe the physical world—think of Einstein's E=mc2—the underlying principles of many physical laws aren't supported by detailed mathematical proofs. Such proofs are generally considered too difficult to solve, especially when it comes to chaotic systems.

But the work of Bedrossian and his team demonstrates it is possible to truly understand and explain some of the most complex natural phenomena through rigorous mathematics. A more complete mathematical understanding of the laws of turbulence could mean that engineers may one day be able to design a better jet with mathematical equations rather than costly experimental testing, or weather forecast models could more precisely predict the paths of hurricanes.

Bedrossian's approach to tackling turbulence was to incorporate four branches of mathematics that rarely interact to such a degree. Punshon-Smith, now at Brown University, contributed his expertise in probability. Blumenthal applied his expertise in dynamical systems and ergodic theory, a branch of mathematics that includes chaos theory. Bedrossian brought his knowledge of partial differential equations, along with his strong intuition for physics born of a long-standing passion for reading physics and engineering literature. All three mathematicians were essential to solving the problem.

"When we started, it was a sort of fantasy," said Bedrossian, who also has a joint appointment in the Center for Scientific Computation and Mathematical Modeling. "We thought it would be great to one day prove this law, but now, a year and a half later, we've done it, and we're looking to see how far we can go."

The new level of collaboration that the team brought to this issue sets the stage for developing mathematical proofs to explain other unproven laws of turbulence. The problems Bedrossian is working on and his method of reaching across disciplines poses both opportunities and challenges.

Sometimes the challenge is in figuring out how to talk about something in mathematical terms for the first time. That's a unique position for someone who says he wasn't good at math and didn't like it in primary school.

When he entered college at Case Western Reserve, Bedrossian intended to be a physics major. But during an upper-level required math course, he began to see the language of mathematics differently.

"When I was young, I assumed everything except for maybe advanced quantum mechanics had already been solved mathematically," he said. "I was fascinated by the way relatively simple physical laws could lead to very subtle, complicated phenomena, and that even though we understood the laws, we couldn't really understand the phenomena they predicted. We didn't have the rigorous mathematical equations for them."

Bedrossian began to look at the world through a mathematician's lens. "

I realized, you can't do science without math," he said. "Once you give me the equation for a physical law, it may still be a physics problem, but it now lives in mathematics. I can ask and answer questions about it using mathematics and only mathematics."

Bedrossian's fearless approach to tackling physics with math early in his career led him to question why vortices such as tornadoes and hurricanes maintain a remarkably stable structure despite their existence in the midst of an otherwise wildly chaotic system.

"It's a very complicated answer," he said, "but our work was the first mathematical work that showed one aspect, the stretching of momentum, contributing to the stability of a vortex."

Solving difficult problems has earned Bedrossian accolades throughout his career, including a Sloan Research Fellowship, a National Science Foundation Faculty Early Career Development Award, and a Simons Fellowship. He also recently received the IMA Prize from the Institute for Mathematics and its Applications, which recognizes an early-career mathematical scientist who has made a transformative impact on the field, and the inaugural Peter Lax award from the 2020 International Conference on Hyperbolic Problems.

During the upcoming academic year, Bedrossian plans to spend a sabbatical at the Courant Institute at New York University with his Simons Fellowship support. While there, he will continue pushing boundaries, exploring the physical world and seeking explanations through rigorous mathematics.

"There are so many fundamental things that we do not understand about how nature works," Bedrossian said. "And that's what makes my job fun."