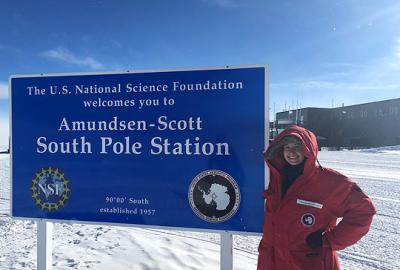 Physics Ph.D. Student Liz Friedman Makes the Most of Her Maryland Experience
Friedman has traveled twice to Antarctica for her research, and she has been an active member of the graduate student community in physics and across campus.

As the twin-engine plane began its approach for landing on the icy runway, Liz Friedman watched a crew member put on an oxygen mask. At that moment, the University of Maryland physics Ph.D. student knew she was in for the experience of a lifetime. Exiting the aircraft, Friedman braced herself for the bone-chilling temperature outside—a frigid 20 degrees below zero. Nothing she'd ever experienced could prepare her for this.

In December 2015, Friedman embarked on her first monthlong research expedition to the South Pole. Her goal: deploy crucial hardware for detecting neutrinos, a key piece of research for her Ph.D.

I was very nervous when I stepped off the plane," Friedman said. "There's the first moment when you're really afraid, but then I got outside and thought 'this isn't that bad.'"In Antarctica, Friedman worked at the IceCube Neutrino Observatory, the first facility of its kind to measure neutrinos—massless, chargeless particles that almost never interact with matter—from beyond our solar system. It was designed to observe the cosmos from deep within the South Pole ice.

"IceCube takes advantage of the pristine South Pole ice to measure a signature of neutrino interactions," Friedman explained. "If a neutrino has enough energy, it can disturb the nuclei in the ice and create a flash of blue light known as 'Cherenkov radiation.' This effect is similar to a duck creating a wake on the surface of a pond, or a plane breaking the speed of sound and leaving a cone of dust. In this case, we get a cone of blue light—the Cherenkov radiation—that points back to where the neutrinos came from."

By studying the neutrinos that IceCube detects, scientists can learn about the nature of astrophysical phenomena occurring millions, or even billions, of light-years from Earth. The origin of neutrinos is unknown, but gamma-ray bursts, active galactic nuclei and blazars are potential sources.

The IceCube Lab itself looks like it's straight out of a science fiction film. It's a large, angular structure in the middle of the vast, icy landscape that's anchored with two large steel columns and stairs with platforms between them.

But the real magic happens nearly 2,500 meters below the surface. There, more than 5,000 digital optical modules (DOMs) connect to vertical "strings" frozen into 86 boreholes, arrayed over a cubic kilometer at various depths. Each "string" contains 60 DOMs designed to detect neutrinos.

IceCube demonstrated that neutrino astronomy was possible, which led to the construction of several more neutrino telescopes. That's where Friedman comes in. She was there deploying crucial hardware for a neutrino telescope that will be used to try to set the record for the highest energy neutrino ever detected.

But Friedman's South Pole adventures included more than scientific discovery. In this remote waystation, thousands of miles from anything that looked like home, she found a warmth and comradery with her coworkers. One of her best memories—Christmas dinner at the South Pole.

"The dinner was incredible. The cooks were able to create a Michelin-quality meal out of frozen food from airplane cargo," Friedman recalled. "And the best part is that everyone played a role in the meal. People volunteered to set up decorations, serve wine, and clean dishes. It's a real community and that means so much during the holidays when we are all so far from home."

But the icy wonder—and exhilarating cold—of the South Pole is something she'll never forget. "The most surprising thing was how much fun stuff there was to do," she said. "It's a really nice, social place. I really miss it."

Learn more! Listen to Liz Friedman being interviewed about her time in Antactica: