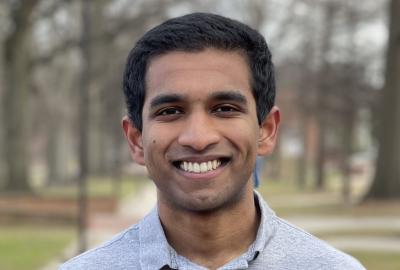 The room was totally silent as Pavan Ravindra decided what his move would be. Would he try the techniques he perfected in practice or throw caution to the wind and just go for it? The timer started, and Ravindra's fingers began to move as fast as lightning, flipping the cube and matching every side, color by color. Just 5.58 seconds later, the crowd erupted into cheers. Ravindra had just become one of the fastest Rubik's cube-solvers in the world.

At UMD, the junior biochemistry and computer science dual-degree student has to solve complicated problems on a daily basis. But none of them are as exciting to watch as when he tackles the complexities of a Rubik's cube and makes finding the solution look like child's play.

Ravindra, a 2020 Goldwater Scholar, started solving Rubik's cubes way back in the third grade. By the time he got to high school, he was solving them for speed and entering competitions.

"In ninth grade, I met a kid in one of my classes who was solving a Rubik's cube pretty quickly," Ravindra recalled. "At that time, he was averaging around 15 seconds and I was around 30 seconds, so he was really impressive."

Ravindra joined the Rubik's Cube club at River Hill High School in Clarksville, Maryland, and he started developing techniques for increasing his speed, which takes practice and patience.

"It's like learning to play basketball," he explained. "First you learn how to dribble, and then once you're comfortable with dribbling, you learn how to do other things. With learning to solve a Rubik's cube, first you learn the different ways to solve it, then you begin trying to optimize to find the fastest solution." As one of the fastest Rubik's cube-solvers in the game, Ravindra has competed in countless competitions, including the 2015 United States National Championships where he finished in the top 10 and had one of the fastest single-solve times in the world—5.58 seconds.

At UMD, Ravindra discovered that he could apply the skills he mastered solving Rubik's cube to his research with Pratyush Tiwary, an assistant professor in the Department of Chemistry and Biochemistry and the Institute for Physical Science and Technology.

"I realized that this problem of describing the system, using a minimal set of parameters, is difficult and is usually done manually," Ravindra said.

"Researchers can now use AMINO to hopefully overcome the barrier of needing information beforehand about the system they are looking at," Ravindra said. AMINO was an important milestone for Ravindra for another reason—the discovery led to his first first-author scientific paper, which was published online in the journal Molecular Systems Design & Engineering in November 2019.

"It feels great to have made something that other people can use," Ravindra said of his publication. "I know this is just my first step into research, but I also know that I'll be making many more contributions in the future, so this was a great learning experience for me."

Ravindra continues to expand on his research in Tiwary's lab while taking advanced graduate student-level classes.

"Along with graduate students in my lab, Pavan continues to apply AMINO to different ambitious and relevant problems, such as how molecules fundamental to life—proteins, DNA and RNA—adopt different shapes and forms," Tiwary said. "Predicting this flexibility is often the key to designing effective, nontoxic drugs for different diseases. Pavan's method is helping make it possible to predict this flexibility in an inexpensive, effective and insightful manner."

It's no secret to anyone who knows him—Ravindra loves to win. Whether he's tackling a Rubik's cube for time or solving a complex problem in the lab, it's his love of challenges that drives him to succeed.

"The challenge is the fun part to me," Ravindra said. "I find competing and succeeding super rewarding." And these days, you could say, all the right pieces are falling into place.