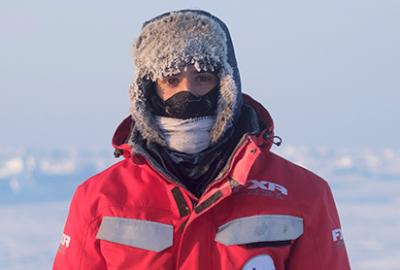 On a Mission: Tracking COVID-19’s Impact on Air Pollution

If you’ve watched a traffic report since COVID-19 stay-at-home orders were issued back in March, you probably noticed something was missing—traffic. With so many people staying home, the usual gridlock was nowhere to be seen.

For Atmospheric and Oceanic Science Professor Russell Dickerson and his research team at the University of Maryland, COVID-19 presented a rare opportunity to answer an important question: When our daily routines—like commuting to work or school—change, how does that impact air quality?

“Lots of scientists who worry about air quality and greenhouse gas emissions had that question simultaneously,” Dickerson said. “And so, there are at least four different institutions working closely with us to answer that question.”

Since the COVID-19 lockdown began in March, Dickerson and his research team have been working with the National Oceanic and Atmospheric Administration (NOAA) to measure, from the air, how changing habits due to the coronavirus have impacted air pollution in the D.C. metro area.

Research scientist Xinrong Ren and graduate student Phillip Stratton, both from UMD’s Department of Atmospheric and Oceanic Science, play a key role in this aerial research. They regularly fly three-hour missions around the area on a small Cessna research aircraft equipped to gather real-time information on pollutants like carbon monoxide and ozone and also greenhouse gases, including methane and carbon dioxide. On the ground, the team analyzes the data from each flight, along with wind and weather information, and compares it with aerial measurements on days when traffic was normal.

“Car traffic actually fell to about half of what it would typically be for a few weeks,” Dickerson explained. “The idea was to take the measurements we had from February before the lockdown and in March, April and May, after the lockdown, and say, ‘Ok, what’s the difference?’”

Preliminary results show significant differences between air pollution levels before and after the lockdown.

“We have evidence that in March, both carbon dioxide and carbon monoxide were down roughly 30%, but that number is subject to change because we are analyzing the data day by day,” Dickerson said.

Even before COVID-19 hit the U.S., images from space were already providing clues to the impact the coronavirus would have on air quality. NASA satellite observations of China captured Dickerson’s attention early on.

“Before we knew that this was going to be a major disruption to the world’s economy, satellite observations were showing that air pollution over China just got dramatically better, and they had a very serious lockdown,” Dickerson observed. “So that came up first and a lot of scientists said, ‘Oh wow, this is a dramatic difference.’ They have seen improvements in nitrogen dioxide in nearly every city on the planet.”

In the D.C. area, researchers from UMD, NOAA, and the National Institute of Standards and Technology have worked together for more than two decades, using satellites, aerial sampling and ground measurements to track and understand the origins, transport and transformation of air pollution, often as a resource for the Maryland Department of the Environment. Dickerson believes the aerial research, which has been underway for 5 years, plays an important role in policymaking and education.

“It’s applied research to help policymakers develop strategy,” he said, “but it’s also a wonderful opportunity for graduate students to understand the meteorology and the physics of chemistry of the atmosphere through hands-on experience and numerical models, and to use our scientific methods to better understand air quality in our own backyard.”

It may be months before Dickerson and his team have the final results from the current COVID-19 aerial studies, but the research could one day provide important information for policymakers on how changes in our routines and driving habits can impact air quality.

“If Maryland instituted some policy that immediately caused half of the cars to either stay home or become zero-emission vehicles, we could answer the question of how air quality and greenhouse gas emissions would change,” Dickerson explained. “Now we have a sense of what would happen. It’s not an overwhelming difference, but it’s a substantial improvement.”

As stay-at-home orders are lifted and people start driving more, Dickerson’s team will continue to track the changes. Although he expects to see a return to normal levels for some of the pollutants in the air, he believes it will be a slow process.

“As traffic picks up, we will probably see a return to normal of some pollutants in the atmosphere, but I don’t think we’re going to go back to exactly what it was before COVID. The demand for electricity is down, gasoline sales are down, jet fuel sales are down, and I think it’s going to be a little while before we have business as usual,” Dickerson explained. “Where we’ll be a year from now is anybody’s guess.”

But, for the sake of improved air quality, he hopes some things won’t change.

“We’re hoping that the new normal will involve more working from home, more Zoom with the computer and less zoom with the car,” he said.