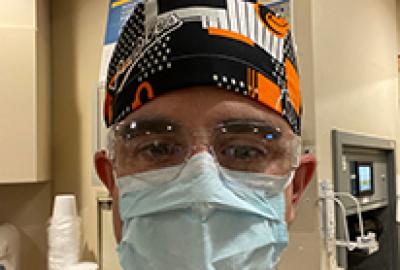 University of Maryland alumnus Merdad Parsey, M.D. (B.S. ’85, biochemistry and microbiology) has spent the last several months on the leading edge of the worldwide effort to find an effective treatment for COVID-19. He joined Gilead Sciences as the company’s chief medical officer in November 2019, just as the first signs of a pandemic were emerging in China. Since then, he has led a drug development team evaluating and testing the effectiveness of the company’s antiviral remdesivir on COVID-19.

In an interview with UMD’s College of Computer, Mathematical, and Natural Sciences, Parsey shared what these last few months have been like for him and his team at Gilead and his thoughts on what’s ahead. This interview has been edited for length and clarity.

Gilead had already developed the antiviral remdesivir—was it developed as a potential treatment for Ebola? And what made you think it had potential for treating COVID-19?

Interestingly, I think it’s sort of an urban myth now that remdesivir was initially developed for Ebola. Actually, remdesivir was developed as an antiviral and was found to have a very broad spectrum against a number of different viruses. When Ebola emerged, we tested the drug, and it had activity against Ebola, but we knew that it was more active against the other coronaviruses like SARS and MERS. Back then, we were testing it against Ebola just to see if we could make an impact on the disease, but we know now the coronavirus is a more natural fit for the remdesivir molecule. We always knew that it would be more potent against the coronaviruses.

What is it about remdesivir or how it works that inhibits COVID-19?

The way to think about it is that there are certain parts of a virus that are necessary to replicate the virus, and they differ between viruses. This molecule remdesivir is able to inhibit RNA polymerase—which is very different among viruses—and it has more potency against replication of the coronaviruses and other viruses than a lot of other molecules. It’s a broad-spectrum antiviral, but each virus has a slightly different sensitivity to it.

How is remdesivir administered?

Right now, it’s intravenous exclusively. That’s how it’s being evaluated. We’re hoping that we can get other ways of administering the drug. We’re particularly looking at inhaled as something we’re hoping we can develop.

There are more than a hundred different drug trials going on right now testing antivirals like remdesivir and combinations of drugs against COVID-19. Do you think all these competing trials will get us to an effective treatment faster or does it confuse things?

That’s a really good question. What often happens during these sorts of epidemics is that the trials that are done may not be helpful because you only get a few people in or they’re done quickly or without the right controls. Generally, in drug development you kind of know the need, the clinical course of the disease and the outcomes. Whereas in an epidemic with a new pathogen like this, we had no really good idea in the early days and we still are learning. So, you have to move very quickly, and you learn as you go.

A lot of the studies are very well run. The NIAID [National Institute of Allergy and Infectious Diseases] study with remdesivir was really well designed and really well conducted, dealing with a large number of patients, tested against placebo, and looking at a variety of factors. But then you look at another drug, something that was touted to have a benefit from a trial of a few patients and ultimately followed by a study of 98,000 patients where it may not have a benefit and could even do harm. So, I think it is important for everyone to keep an eye on the quality of data and the quality of information that we’re getting.

The pressure—due to public expectations and the rapid spread of the virus itself—must be huge. How do you deal with the challenges of the drug trial process?

It’s been very challenging. With COVID-19, you kind of have to do everything—the entirety of a clinical development that would take usually five, six or seven years—in two or three months. And the fear around the virus makes people very anxious for a cure. The team here was optimistic going in, knowing what we knew about the medicine and its ability to inhibit the virus, and we felt a real responsibility to try and move as quickly as we could. Most of us didn’t sleep for most of March and April. There was a lot of work being done at 3 in the morning, taking calls globally and getting deluged with emails from patients and their families trying to get access to the drug. It’s just really, really a trying time but I’m so impressed with the team here and how people just persevered. I think we really pushed through to do the right thing under the circumstances.

Tell us about the results you’re seeing from remdesivir trials so far. The U.S. Food and Drug Administration granted emergency use authorization to get the drug to the most critically ill COVID-19 patients. What’s next?

More information will come out of the WHO [World Health Organization] trial and we have a couple of second-generation trials that will be looking at combinations of remdesivir with other medicines to see if the combination is better than remdesivir alone. I think we’ve established that remdesivir is well tolerated and effective. So, now that we know that this is the first effective therapy and should be the backbone of how people are treated, the next question is, ‘Can we better define what other patients should be getting the drug?’ I think over the next months we should start to get more information as to what is the right cocktail, if you will, of medicine that people should get treated with to save as many lives as possible.

After all the sleepless nights and long hours and months of work, how does it make you feel that your team and this company have actually come up with something that works?

This is really gratifying. I think that we’re all just glad that we made an impact. We’d do it all over again, obviously. I don’t think we’d feel that differently if the medicine hadn’t worked; we’d still feel that we did the right thing. You’ve got to pay your dues to answer the question, that’s how science works. And for me personally, I’m so grateful to be a part of such a great team. I can take very little credit for what we’ve done. It’s an amazing amount of work.

You spent your time at UMD studying biochemistry as an undergrad—did you ever imagine that all these years later, you’d be involved in something like this?

No, never in a million years. When I was at College Park, I worked in Rita Colwell’s  lab in microbiology. My time at UMD is where I developed my love of science and it definitely helped put me on my path to where I am. I went into critical care ultimately, but I never imagined a year ago that I’d be in this situation. I feel very fortunate to have been trained across the board in the way I have been, to be able to be here with this great team, and leverage all of my experience and try to make an impact. I’ve been lucky.

Any predictions on when we’ll have a vaccine?

I learned a long time ago to stay out of predictions. I’ve been wrong so often that I don’t make predictions anymore. What I would say is that I’m pretty sure that we will know, certainly by the end of the year, whether we have vaccines that can induce an immune response. The important question is whether those vaccines will protect you from infection. That’s the part that’s going to be much harder to determine and that’s hard to do in a fast way. It’s going to take time to vaccinate enough people to see if those people are protected from getting infected compared to people who aren’t vaccinated. One thing I’ve learned in this business is you can’t speed up time. You have to have patience to let the trials finish and let the experiment run. But, I’m very hopeful.