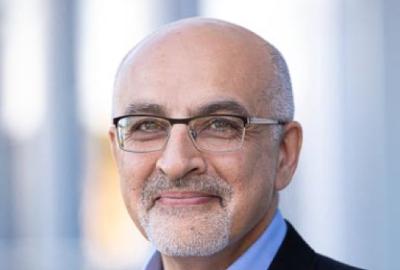 From the time he was very young, growing up in a tiny, remote mining town in the coastal mountains of British Columbia, people noticed one thing about Myles Poulin—he was always curious and wanted to learn more about everything around him. Although the years took Poulin far from his home in Canada, he never lost that limitless curiosity.

Now an assistant professor of chemistry and biochemistry at the University of Maryland, Poulin recently received a Faculty Early Career Development (CAREER) award from the National Science Foundation (NSF). This grant will support his research into the role carbohydrates play in bacterial virulence, which could ultimately lead to new ways of attacking bacterial processes that lead to infection.

“This NSF award will help us decipher how enzymes catalyze the assembly of sugar molecules that are found on bacterial cells and reveal the molecular mechanisms of how these enzymes function,” said Poulin, who joined UMD in 2016.

Bacteria use sugars or carbohydrates as molecules to form coatings on the outside of human cells. Facilitated by enzymes known as glycosyltransferases, some bacteria use these exported sugar molecules to develop complex multicellular communities known as biofilms, which are resistant to many antibiotics and can make many serious types of infection difficult to treat.

Poulin hopes his research into glycosyltransferases and the mechanics of how they function in human cells could be an important step toward new therapies for some of the persistent infections acquired in hospitals and other infections that develop from implanted medical devices.

“Ultimately, our goal is to create new types of inhibitors that block the assembly of these complex sugar modules on the exterior of the cells. Such inhibitors will prevent the bacteria from forming biofilms, so that they can be more easily treated by conventional antibiotic therapies,” he said. “This grant is a tremendous opportunity.”

Poulin has been passionate about his research from the very beginning, but this wasn’t his original career plan. Inspired by a high school science class, he was on track to becoming a medical doctor, even when he entered the University of Northern British Columbia. His first undergraduate research experience changed everything.

“In the small town where I grew up, there wasn’t a lot in the way of research opportunities. It just wasn’t something that I had been aware of before I got to university,” Poulin said. “But when I had the opportunity to go into the lab, I realized that what I really thought I liked about medicine was the scientific underpinnings—the pursuit of new potential therapeutics or new ways of understanding how biological systems function.”

As principal investigator of the NSF award, which provides support up to $690,000, Poulin hopes to share his passion for scientific discovery and open up opportunities to others who may have never considered research as a career path.

“I got my start because of these research opportunities I had when I was early on in my undergraduate career. I want to try to give those opportunities to others who don’t have a history of family members who work in science and might not have even thought that they were interested,” Poulin said. “This grant is going to allow me to recruit undergraduate students into my research program to participate in these studies.”

Though teaching and research consume much of Poulin’s regular routine, he still tries to find time for a favorite diversion—running. Whether he’s pushing through half-marathons or just taking a quick spin around his neighborhood, running helps keep Poulin, and his work, on track.

“If something’s stuck in my head, I get focused on running and everything else kind of fades away, so it allows me to refocus and get on task when I go back,” Poulin said.

Poulin is worlds away now from the remote mining town where he grew up. Even so, some things haven’t changed. The same curiosity that fueled his imagination as a child still pushes him every step of the way.

“I’m always looking at types of tools and techniques we can bring into the work that we’re doing and what the next step in that process will be,” Poulin said.

And he isn’t likely to stop asking questions anytime soon.