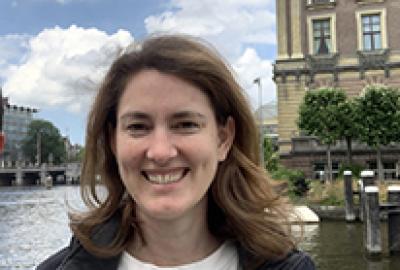 Securing Systems and Chasing Bad Guys
Sarah Brown (M.A. ’03) connects the dots from mathematics to a global career in cybersecurity. 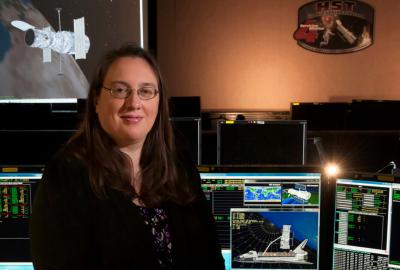 The Best of All Worlds
Elizabeth Corderman (B.S. ’94) lives her childhood dream of a career at NASA.

Two applied mathematics graduates met at UMD in 1976 and have been married for 41 years.

Not even the brightest minds could have calculated the chances of such a perfect love story.

As Schwartz descended the stairs to join the crowd, Tucker was going up the stairs. When he saw her, he knew he could not simply let her pass by. He struck up a conversation and learned she was from New York, like him, and he made it a point to get to know her.

It wasn't long before they were wrapping up their first dinner date, with Schwartz playing the guitar for Tucker in his apartment. Schwartz’s undergraduate degree from the University of Hartford was in physics, but he also minored in performance guitar and had just returned from a summer of intense master classes. Raised on classical music, Tucker enjoyed all kinds of music.

“I laid down on the couch while he played the guitar, and the next thing he knew, I was out cold. I fell asleep,” she recalled with a laugh.

Despite her conking out on him, Schwartz knew Tucker was special. He later told her that he was interested in a serious relationship, and she was open to pursuing one with him as well. By Labor Day weekend, just a few short weeks after meeting, the two were in a committed relationship.

They went to New York for the holiday weekend and Tucker met Schwartz’s family for the first time.

Once Schwartz’s grandfather learned what she had done, Tucker became a golden girl to the family. They aren’t sure when they realized they were in love, but they agree that their feelings developed fast.

“I remember wanting to be with him and having a good time when we were studying and doing other things, so I think it happened pretty quickly,” Tucker said.

Later that school year, they moved in together. After about a year of dating, one morning as they were having breakfast, Schwartz said to Tucker, “I think we should make this permanent.”

The two were married on December 24, 1978, in Long Island, New York, at Tucker’s synagogue with friends from Maryland in attendance. Winter break was the best time to get married because graduate students took their comprehensive exams in the summer and classes in the fall.

Since graduating from the university, both have put their mathematics degrees to good use. Tucker worked for SAIC for 24 years. She is now a principal with the engineering consulting firm McKean Defense, where she has been for 14 years. Schwartz conducted postdoctoral research at the National Institutes of Health and shortly thereafter began working for the Naval Research Laboratory (NRL), where he still works today. Schwartz’s work at NRL has included research collaborations with faculty members at Maryland.

Schwartz and Tucker shared their thoughts on some key elements necessary to make a relationship last as long as theirs: tolerance, patience, good humor, love, attentiveness, friendship, creativity, knowing when to back off and collaboration.

“Collaboration makes us joined at the hip,” Schwartz said.

And a shared appreciation of good music also helps. Schwartz is still a talented classical guitar player, but Tucker doesn’t fall asleep listening on the couch. Instead, she prepares a fabulous spread for about 25 friends who gather in their home annually for a private performance.