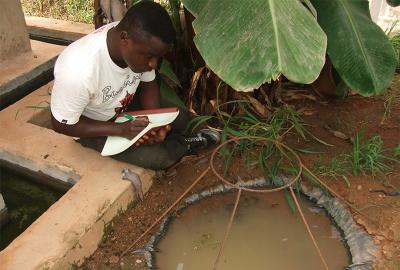 The American Association for the Advancement of Science (AAAS) awarded its 2019 Newcomb Cleveland Prize to University of Maryland entomologists Raymond St. Leger, Brian Lovett and their seven West African collaborators.

The prestigious award is given to the authors of the most impactful paper published in AAAS’s flagship journal Science during the previous year. The winning paper is chosen based on the quality of the scholarship, innovation, presentation, and the likelihood of influencing the field and wider interdisciplinary significance.

"I am thrilled to congratulate Ray, Brian and their collaborators on this well-deserved award, which recognizes their fearless innovation in developing and testing a genetically engineered fungus to fight mosquito-borne diseases such as malaria, dengue and Zika,” said Amitabh Varshney, dean of UMD’s College of Computer, Mathematical, and Natural Sciences.

“We’re looking for papers that change the way people think about science,” said Holden Thorp, editor-in-chief of the journal Science and chair of the judging panel. “I think when it comes to a problem like malaria in a location like Burkina Faso, this was a new way of thinking about that problem. We felt that the careful way the experiments were done was very important. And I think that in terms of the public health, in terms of the science itself, in terms of the way it was rendered, it was a superb study from start to finish.”

The study, led by Lovett, St. Leger and their colleagues Abdoulaye Diabate and Etienne Bilgo from the Institut de Recherche en Sciences de la Santé and Centre Muraz in Burkina Faso, described the first trial of a transgenic approach to combat malaria mosquitoes ever to be tested outside the laboratory. The researchers first genetically modified a naturally occurring fungal pathogen to deliver a lethal, insect-specific toxin to mosquitoes. They then tested the fungi in a screened enclosure in Burkina Faso called a “MosquitoSphere,” which was specially designed to mimic conditions of a rural village. The study showed that treatment with the engineered fungi killed roughly 75% of insecticide-resistant mosquitoes and caused an established population of mosquitoes to collapse within 45 days.

According to Thorp, the AAAS award selection committee felt that using a mosquito-specific fungal pathogen was an extremely creative idea. They were impressed by both the careful way the experiments were done and the fact that the researchers carried the study all the way from the idea phase to providing proof that the idea can work.

“It’s hard enough to get a research paper into Science, but for it to be judged the most impactful paper of the year is astonishing, and it suggests they feel the same way we do about this work and its potential,” said St. Leger, a Distinguished University Professor in the Department of Entomology at UMD.

Lovett, who was awarded his Ph.D. in entomology from UMD in 2019 for conducting this research, was equally thrilled to receive the prize.

“It is an incredible honor for my Ph.D. work to be recognized by AAAS with the Newcomb Cleveland Prize,” Lovett said. “To have this prestigious scientific society describe our biotechnology as most promising is a testament to the interdisciplinary and application-focused approach of our international team.”

The project built on decades of creative, highly innovative work by St. Leger that has resulted in numerous new methods and discoveries which contribute to our understanding of infection in general, as well as providing surprising new strategies to combat insect pests.

“As the first transgenic malaria intervention validated outside the laboratory, this study required us to resolve not just scientific issues but many other considerations,” St. Leger said. “We had to gain support from NIH and the approval of the local agencies. Gaining regulatory permission from the National Biosecurity Agency in Burkina Faso was itself regarded as a groundbreaking accomplishment.”

St. Leger credited Lovett’s “can-do” collaborative approach for keeping the project on course through negotiations with various stakeholders and for accomplishing the important local education and training required for the study to succeed.

“The social and regulatory considerations are important aspects of this type of work that are under-supported and under-recognized in science generally,” Lovett said. “So, receiving validation from AAAS is encouraging.”

According to Thorp, the comprehensive approach of combining rigorous science with careful social and regulatory planning helped this research paper rise to the top of the year’s selections.

“A big part of what [the prize committee] focused on was the awareness that the researchers had of the way this study related to the location and regulatory interests that they had to take care of, and it made us feel really good to know that all of that was carefully registered,” Thorp said. "That’s why I say that the professionalism and the way this was done from top to bottom was really striking.”

Watch a video about this project here:

You can read our story about this study here.

The award-winning research paper “Transgenic Metarhizium rapidly kills mosquitoes in a malaria-endemic region of Burkina Faso” was published in the journal Science on May 30, 2019.

This work was supported by the National Institutes of Health (Award No RO1-AI106998). The content of this article does not necessarily reflect the views of this organization.