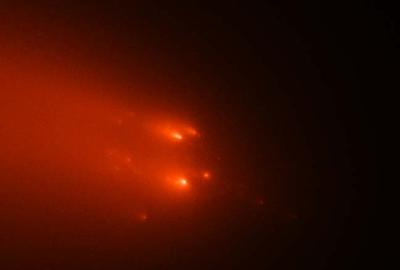 NASA’s Webb Telescope Detects First Evidence of Carbon Dioxide in Exoplanet Atmosphere
UMD astronomers Eliza Kempton and Thaddeus Komacek were part of the research team that analyzed the spectrum of WASP-39 b.

A rare asteroid orbiting snugly within the inner confines of our solar system has been discovered by Caltech's Zwicky Transient Facility (ZTF), a survey camera based at Palomar Observatory. The newfound body, named 2020 AV2, is the first asteroid found to orbit entirely within the orbit of Venus.

“This is a very exciting discovery,” said Quanzhi Ye, a visiting assistant research scientist in the University of Maryland Department of Astronomy and ZTF co-investigator. “Astronomers have been systematically searching the skies for small bodies since the 1970s and ’80s, and there's not much uncharted frontier left in the inner solar system. Asteroids with orbits interior to Venus’s orbit are challenging to observe, and I'm thrilled we finally found this one.”

2020 AV2 belongs to a small class of asteroids known as Atiras, which are bodies with orbits that fall within that of Earth. With an even smaller orbit than other Atiras, 2020 AV2 is known as a Vatira. The “V” was added to indicate that its orbit falls entirely inside the orbit of Venus. Because Vatiras orbit so close to our sun, they are only visible at dusk or dawn and were only hypothesized until now.

"Getting past the orbit of Venus must have been challenging [for 2020 AV2]," said George Helou, executive director of the IPAC astronomy center at Caltech and a ZTF co-investigator. According to Helou, the asteroid must have migrated in toward Venus from farther out in the solar system.

"The only the way it will ever get out of its orbit is if it gets flung out via a gravitational encounter with Mercury or Venus, but more likely it will end up crashing on one of those two planets," he said.

2020 AV2 is the third Atira discovered by ZTF so far as part of its Twilight program developed by Ye and Wing-Huen Ip of the National Central University in Taiwan. The asteroid, which was initially designated ZTF09k5, was first flagged as a candidate on January 4, 2020, by Bryce Bolin, a postdoctoral scholar at Caltech. Soon thereafter, an alert was posted by the Minor Planet Center, the official organization for cataloging small solar system bodies such as asteroids, and this piqued the interest of the astronomical community. Several telescopes around the globe followed up on the target, helping to pin down the body's unusual orbit and narrow down estimates of its size.

The asteroid spans about 1 to 3 kilometers and has an elongated orbit tilted about 15 degrees relative to the plane of our solar system. During its orbit around the sun, it always travels interior to Venus, but at its closest approach to the sun, it comes very close to the orbit of Mercury. It also has one of the shortest “years” of any asteroid, circling the sun in approximately 151 days. Only asteroid 2019 LF6, which travels beyond the orbit of Venus, has the same approximate “year.”

"An encounter with a planet probably flung the asteroid into Venus's orbit," said Tom Prince, a co-investigator of ZTF as well as the Ira S. Bowen Professor of Physics at Caltech and a senior research scientist at the NASA Jet Propulsion Laboratory. "It's the opposite of what happens when a space mission swings by a planet for a gravity boost. Instead of gaining energy from a planet, it loses it."

Members of the ZTF team say they look forward to hunting for more Vatira asteroids in the future.

“Now we finally found the tip of the iceberg,” Ye said. “Who wouldn't wonder what's underneath it?”

This work was supported by the National Science Foundation and an international collaboration of partners. Additional support comes from Caltech and the Heising-Simons Foundation. ZTF data are processed and archived by IPAC. NASA supports ZTF's search for near-Earth objects through the Near-Earth Object Observations program. The content of this article does not necessarily reflect the views of these organizations.

This story was adapted from text provided by Caltech and written by Whitney Clavin.