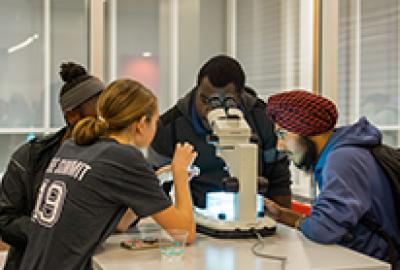 University of Maryland biological sciences major Justin Lee is the first author on eight research papers and one book review, and a coauthor on three additional research papers. His most recent paper, published in the journal Zootaxa on August 27, 2019, describes two new species of gecko from the southeast Asian country of Myanmar. By the time Lee graduates in May 2020, he’s likely to add a few more new species descriptions to his resume.

“I’ve been really lucky to be able to work at the Smithsonian,” said Lee, who has volunteered in the Division of Amphibians and Reptiles at the Smithsonian’s National Museum of Natural History since high school. “I’ve gotten to learn a lot of skills that working biologists use and most students aren’t exposed to until graduate school.”

Lee’s work at the museum led to opportunities for him to publish in scientific journals, but his drive to do the work stems from an obsession with reptiles and amphibians that began when he was just 2 years old.

“My dad took me to the Central Park Zoo in New York,” Lee said. “We went to the reptile house and I saw a rhinoceros viper, a really attractive snake from Africa. I also saw a boa constrictor, and something really clicked.”

From that day on, Lee’s curiosity for reptiles and amphibians was insatiable. He watched nature documentaries, devoured books on snakes and lizards, and begged his mother to let him have a pet snake.

When he was 12, Lee visited the Smithsonian’s National Museum of Natural History and had a chance meeting with museum herpetologist Roy McDiarmid. All the knowledge Lee had absorbed about biology, taxonomy and evolution paid off in that moment, and an enduring friendship was born.

Lee and McDiarmid stayed in touch, and by the summer of Lee’s sophomore year of high school, he was invited to begin an internship in the herpetology collection at the Smithsonian. The 9-to-5 internship meant Lee had to move from his home in Pennington, New Jersey, to a rented apartment in Washington with his mother every summer. To Lee, the hassle was worth it, and it wasn’t long before he began helping to curate the collection, identifying species that herpetologist Daniel Mulcahy brought back from collecting trips in Myanmar.

“We’re working on creating a field guide for that region,” said Mulcahy, “and Justin has played a big role in identifying the specimens I’ve brought back. When we’re collecting, we just put our quick identification on specimens knowing that we’re going to compare them with species descriptions in the literature and molecular studies in the lab back home. Often, Justin has changed an identification based on his evaluation, and it turns out, when I sequence it in the molecular lab, he’s right.”

After working side-by-side with scientists in high school, Lee was eager to continue doing hands-on work in a lab. UMD was at the top of his list of colleges. It offered both proximity to the Smithsonian, where he could continue his research, and a slot in the College Park Scholars Life Sciences living-learning program.

“I’m so glad I chose Maryland,” Lee said. “The Life Sciences program really encouraged me to continue doing my research, and there were so many opportunities for me to learn hands on. I have nothing but love and gratitude for everybody here who has allowed me to keep doing what I’m doing.”

Lee’s latest research paper describes three species from Mulcahy’s collection. Two are new to science, and all of them belong to a genus that had never been recorded from mainland Myanmar.

“Myanmar is really understudied as far as reptiles and amphibians go,” Lee said. “It’s common for scientists to discover new species or find species that have been known in other areas but never seen in Myanmar before. But finding a whole genus, which is a higher taxonomic rank, is a lot more significant. This work fills in a big gap in scientific understanding of the distribution of the genus Cnemaspis throughout Asia.”

This is the first time Lee described a new species, but his earlier papers include descriptions of snakes not previous seen in Myanmar. He also published papers on the effects of drought on snakes in Kansas, and the reproductive biology and diet of snakes from the Amazon.

In addition to his work at the museum, Lee has had opportunities to conduct science through UMD. He received a 2017 Undergraduate Summer Research, Travel and Educational Enrichment Award from the College of Computer, Mathematical, and Natural Sciences’ Alumni Network, which he used to help conduct surveys of reptiles and amphibians for the Maryland-National Capital Park and Planning Commission. He also traveled to the San Francisco to examine reptile and amphibian specimens from Myanmar at he California Academy of Sciences.

“What I found refreshing about Justin is that he wanted to work in the lab to gain experience because he really loves systematics,” Wilkinson said. “His motivation is doing science, contributing to publications and going to graduate school.”

As Lee begins his senior year, he is contemplating his options for the immediate future.

“I want to take a gap year after graduation and gain some more real-world experience before applying to grad school and pursuing my Ph.D.,” Lee said.

Lee said his ideal career would be one in which he can pursue his own research, but he’s keeping his options open.

“It could be as museum curator, naturalist, technician or consultant,” Lee said. “Just doing something involved with conservation and biology for the rest of my life, that would make me happy.”

The research paper, “The discovery of Rock Geckos CnemaspisStrauch, 1887 (Squamata: Gekkonidae) in the Tanintharyi Region, Myanmar with the description of two new species,” Justin L. Lee, Aryeh H. Miller, George R. Zug and Daniel G. Mulcahy, was published in the August 27, 2019, issue of the journal Zootaxa.