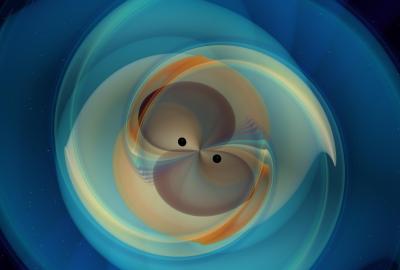 The Past, Present and Future of Gravitational Wave Astronomy

When Albert Einstein published his general theory of relativity in 1915, he gave the scientific community a wealth of theoretical predictions about the nature of space, time, matter and gravity. Unlike much of his prior work, however, general relativity wasn’t easily testable with experiments and direct observation.

That all changed a century later, on September 14, 2015, when the twin Laser Interferometer Gravitational-Wave Observatory (LIGO) detectors registered gravitational waves from the merger of two black holes. For the first time, the scientific community had definitive support for one of the greatest predictions arising from Einstein’s general theory of relativity—that the acceleration of massive objects can produce ripples in the fabric of spacetime.

In just three short years since that initial observation, LIGO has made or contributed to a landslide of new discoveries, helping to usher in the age of gravitational wave astronomy. University of Maryland Astronomy Professor Coleman Miller, an expert in the theory and modeling of gravity, co-authored a review of the past, present, and future of gravitational wave astronomy for the journal Nature, published on April 25, 2019. The article is part of a series that celebrates the 150th anniversary of the journal, which was first published on November 4, 1869.

“Direct observation of gravitational waves was an important test of general relativity that gave us access to information we simply didn’t have before,” said Miller, who is also a co-director of the Joint Space-Science Institute (JSI), a partnership between UMD and NASA’s Goddard Space Flight Center. “There is a very limited set of ways we can get information about the distant universe beyond our solar system. We were missing a lot of non-trivial events before we could detect gravitational waves. To offer some perspective: the final plunge of a black hole merger emits tens of times more energy in gravitational waves than all the stars in the visible universe radiate within the same period of time.”

Miller is a co-author of more than 20 publications related to gravitational radiation. Although he served as the chair of the LIGO Program Advisory Committee for four years (2010-2014), Miller has not been directly involved in LIGO’s science operations. This provides him with a uniquely knowledgeable, yet scientifically objective, viewpoint on the topic.

Co-authored with Nicolás Yunes of Montana State University, the review article traces the early history of attempts to investigate general relativity, including several indirect observations and theoretical work. Then, Miller and Yunes describe the contributions of UMD Physics Professor Joseph Weber (1919-2000), who was the first to suggest that it was physically possible to detect and measure gravitational waves.

Beginning in the 1960s, Weber designed, built and operated a pair of solid aluminum bars—one near UMD’s campus and another just outside Chicago—which he suggested would resonate like a bell when struck by passing gravitational waves. Thus began a decades-long scientific quest that would involve hundreds of scientists the world over, including many UMD faculty and staff members and alumni. The physics community eventually settled on a completely different interferometer design that would become the basis for LIGO’s twin detector facilities in Livingston, Louisiana, and Hanford, Washington.

With the help of UMD Physics Professor and JSI Fellow Peter Shawhan and UMD College Park Professor of Physics Alessandra Buonanno—both principal investigators with the LIGO Scientific Collaboration—the construction and fine-tuning of the detectors resulted in LIGO’s historic first observation in 2015. Just two years later, in 2017, LIGO project leads Rainer Weiss of the Massachusetts Institute of Technology and Kip Thorne and Barry Barish of Caltech were recognized with the Nobel Prize in physics for the groundbreaking observation.

LIGO followed the initial 2015 detection with several more observations of black hole mergers. But another major turning point came on August 17, 2017, when scientists across the world made the first direct observation of a merger between two neutron stars—the dense, collapsed cores that remain after large stars die in a supernova. The merger was the first cosmological event observed in both gravitational waves and—with the help of a large array of ground- and space-based telescopes—the entire spectrum of light, from gamma rays to radio waves.

“This event gave us instant confirmation that gravitational waves travel at a speed that is indistinguishable from the speed of light,” Miller explained. “For years, there have been alternate theories of gravity that would explain what dark matter is thought to do. But many of these relied on gravitational waves reacting to the gravity of massive objects differently than light does. This was not found to be the case in the wake of a neutron star merger, so observing this event eliminated a wide swath of these theories immediately.”

The neutron star merger also yielded the first direct observation of a kilonova—a massive explosion now believed to create most of the heavy elements in the universe. Led by UMD’s Eleonora Troja, an associate research scientist in the Department of Astronomy, an early analysis of the kilonova suggested that the explosion produced a staggering amount of platinum and gold, with a combined mass several hundred times that of Earth.

“This finding alone strongly swung the needle toward a conclusion that all elements heavier than iron are all produced in neutron star mergers,” Miller explained. “That’s very exciting.”

On April 1, 2019, LIGO began its third observing run, after a series of upgrades to its lasers, mirrors and other components. While Miller is hesitant to set his own expectations too high, he is hopeful that the latest round will yield some new surprises.

“The universe will give us what it will give us. That said, it would be wonderful to see a merger between a black hole and a neutron star,” Miller said. “And a few extra double neutron star mergers certainly wouldn’t hurt.”

Looking further down the line, Miller and Yunes also assessed the prospects for observing the gravitational wave background. This ever-present hum of gravitational waves is thought to contain the fingerprints of orbiting black holes, neutron stars and other massive objects. These pairs of objects may be tens, hundreds or even thousands of years away from merging—and thus are unable to produce a spike in gravitational waves detectable with current technology. Miller likens the effort to adjusting one’s ears to the din of conversation in a crowded room.

“Imagine arriving at a party. At first, you can see that everyone is talking, but the sound registers quietly, if at all,” Miller said. “Then your hearing gets better. You’re not yet able to hear every individual, but you can hear the sum total. Then, as your hearing gets better, you can hear some nearby conversations and can distinguish between people who are near and far.”

Within the next few years, the International Pulsar Timing Array (IPTA) collaboration could become the first to detect the subtle drone from thousands of pairs of supermassive black holes. With the help of the world’s largest radio telescopes, IPTA will carefully track deviations in the precise, clock-like flashing of roughly 100 small, rotating neutron stars called millisecond pulsars. These deviations will help IPTA detect gravitational fluctuations from orbiting pairs of supermassive black holes, each of which contains billions of times the mass of the sun.

The next big step in gravitational wave astronomy will be the launch of the Laser Interferometer Space Antenna (LISA) mission, led by the European Space Agency in partnership with NASA. This trio of satellites, currently slated for deployment by 2034, will be sensitive to a lower range of gravitational wave frequencies than LIGO. As such, LISA should be able to observe events that LIGO cannot detect, such as mergers that involve one or more supermassive black holes.

“A lot can happen in 15 years. In the meantime, I plan to eat my vegetables so I can be around to appreciate LISA’s findings when the satellites are launched,” Miller said. “The excitement in the astrophysical community is only increasing. Expectation of new discovery has been one the enduring excitements of gravitational wave astronomy.”

The review article, “The new frontier of gravitational waves,” M. Coleman Miller and Nicolás Yunes, was published in the journal Nature on April 25, 2019.