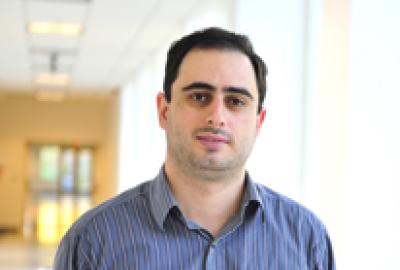 Computer Science's Mohammad Hajiaghayi Wins Prestigious Guggenheim Fellowship
Hajiaghayi is one of 168 winners chosen from a group of almost 3,000 applicants in the 95th competition for the award.

Three faculty members in the University of Maryland’s College of Computer, Mathematical, and Natural Sciences (CMNS) received the University System of Maryland’s Board of Regents Faculty Awards for distinguished performance in mentoring; scholarship, research or creative activity; and public service.

These awards are the highest honor presented by the Board of Regents, and the recipients will be formally recognized at a special ceremony on April 19, 2019, in Baltimore.

The college’s winners are:

Reid Compton received a Faculty Award for Excellence in Mentoring.

Over the course of his 22-year career at UMD, Compton has taught more than 150 credit-bearing courses in addition to serving as an academic advisor for over 100 undergraduates each semester. From 2009 to 2018, Compton directed the College Park Scholars Life Sciences Program, one of 12 interdisciplinary programs designed to intellectually challenge and engage academically talented first- and second-year students. Scholars from the same program live together in a residence hall and have the opportunity to participate in internships, research, community service, study abroad programs and travel. Currently, as associate chair and director of undergraduate studies in the Department of Biology, Compton develops curricula and leads educational initiatives to prepare students for future careers.

“Through these roles, he has had an impact on literally thousands of students and made profound contributions to the lives and future directions of hundreds of students who would call him a mentor,” said Amitabh Varshney, dean of CMNS.

Compton’s previous honors include the 2018 Kirwan Undergraduate Education Award and a National Academies Education Fellowship in the Life Sciences in 2008-09. In addition, six UMD Merrill Presidential Scholars recognized him as a faculty mentor.

With over 100 journal publications and 55,000 citations, Davis is an international expert on computer vision. His work made contributions to the fields of video analysis, visual surveillance, object detection and recognition in images and videos, face recognition and other biometric image analysis problems, high performance computing for computer vision, and probabilistic logical models of images and videos. Davis served as the founding director of UMIACS from 1985 to 1994 and currently directs UMIACS’ Center for Automation Research. In addition, he previously served as chair of the Department of Computer Science from 1999 to 2012. Davis serves on the editorial board of the International Journal of Computer Vision.

“For the past several decades, the University of Maryland has been recognized as a ‘go-to’ institution for up-and-coming scientists interested in expanding their knowledge base in the field of computer vision,” said Mihai Pop, professor of computer science and director of UMIACS. “This is due in no small part to the academic expertise and leadership abilities of Larry Davis.”

Davis received his Ph.D. and M.S. in computer science from UMD in 1976 and 1972, respectively, and his B.S. in mathematics and physics from Colgate University in Hamilton, New York, in 1970.

Plane directs MCWIC, which launched in 2014 to provide opportunities for female students of all backgrounds at UMD and local K-12 schools to engage in computing activities. In 2017-18, MCWIC supported over 1,400 K-12 students and nearly 250 UMD students through its programs. Thanks in part to the efforts of Plane and MCWIC, the number of female undergraduates in the department more than doubled over the last five years. The number of underrepresented minorities in the major also increased by 50 percent during the last five years. Plane also works with organizations ranging from the Girl Scouts to the Maryland state legislature to address diversity across educational levels of computing.

“Jan is passionate about improving diversity in the field of computing,” said Ming Lin, professor of computer science and holder of the Elizabeth Stevinson Iribe Chair of Computer Science. “Her innovative educational and public outreach activities stem from her 30 years of experience in teaching with a unique background of having graduate degrees in both computer science and in education.”

Plane received the CMNS Board of Visitors Creative Educator Award in 2018 and a Women of Influence Award in 2017 from UMD President Wallace Loh’s Commission on Women. She was named the Thelma M. Williams Advisor of the Year in 2010 and a Provost’s Faculty Academic Advisor of the Year for 2008-2009. She was also honored with a Leadership Award from Women in Technology and the inaugural CyberJutsu Award from the Women’s Society of CyberJutsu, both in 2014.

Plane received a Ph.D. in education policy and leadership from UMD in 2010; an M.S. in computer science from the University of Wisconsin, Milwaukee, in 1989; and a B.A. in computer science, philosophy, and mathematics from Wartburg College in Waverly, Iowa, in 1987.