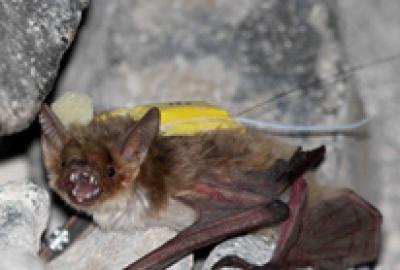 University of Maryland researchers analyzed an evolutionary tree reconstructed from the DNA of a majority of known bat species and found four bat lineages that exhibit extreme longevity. They also identified, for the first time, two life history features that predict extended life spans in bats.

Their work is described in a research paper, published in the April 10, 2019 issue of the journal Biology Letters, which concluded that horseshoe bats, long-eared bats, the common vampire bat and at least one lineage of mouse-eared bats all live at least four times longer than other, similarly sized mammals. The researchers also found that a high-latitude home range and larger males than females can be used to predict a given bat species’ life span.

“Scientists are very interested in finding closely related species in which one is long lived and one is short lived, because it implies that there has been some recent change to allow one species to live longer,” said Gerald Wilkinson, a biology professor at UMD and lead author of the paper. “This study provides multiple cases of closely related species with varying longevity, which gives us many opportunities to make comparisons and look for some underlying mechanism that would allow some species to live so long.”

Longevity is often correlated to body size, with larger animal species generally living longer than smaller ones. For example, an African elephant can live as long as 70 years, while a common house mouse typically lives only one to three years. Humans are considered relatively long-lived animals, tending to live about four times longer than most other mammals when adjusted for size. But bats can far exceed that. Some species can live 40 years—eight times longer than similarly sized mammals—which is why scientists have long sought to understand bats as a model for healthy aging.

This is the first time researchers have reconstructed longevity on an evolutionary tree of bats and used that information to compare traits that could account for life span differences between related species. Wilkinson and his coauthor, UMD biological sciences graduate student Danielle Adams, analyzed traits that were known to correlate with longevity—body size, cave use and hibernation—as well as traits that had not been previously considered, such as home-range latitude and size differences between males and females.

The researchers found that hibernating bat species located in more extreme latitudes live longer than those closer to the equator. Wilkinson said the researchers can’t say for sure how latitude impacts longevity, but their study suggests it may have to do with these bats’ ability to allow their body temperature to fluctuate. Because higher latitudes tend to require longer hibernation periods, hibernating bats must be able to adjust their body temperature, allowing it to drop significantly during hibernation and rewarm during active times.

“Of the lineages of bats that live a long time, three of them are hibernators and one of them is the vampire bat,” said Wilkinson, who is also associate dean for faculty affairs in the College of Computer, Mathematical, and Natural Sciences at UMD. “The vampire bat is very unusual for a mammal in that it can let its body temperature rise and fall throughout the day.”

This ability allows a vampire bat to conserve energy if it fails to obtain a blood meal. Scientists have previously suggested that the ability to tolerate variations in body temperature may enable some mammals to fight infection better than those without that ability. This happens to a limited extent in humans when the immune system attempts to kill a virus or bacterial infection by raising body temperature and causing a fever.

In the majority of bat species, females are larger than males. (Scientists have speculated that this could be due to the need for females to fly while pregnant and carry their young.) But in some tropical bat species, males are larger than females. Among these bats, competition for females may have led to male-on-male aggression that favored the evolution of larger male body size. According to Wilkinson, over time, the shift to larger and larger males would have been advantageous to males seeking mates, but sexual conflict might also have led to greater mortality. Over time, high mortality rates from aggression may have led to shorter species life spans, because traits that confer physical dominance would have been more important than those that extend life span.

The researchers hope this work can pave the way for more comparative studies that will explain why certain traits are associated with life span.

“If we lived as long as bats, adjusted for size, we could live 240 years,” Wilkinson said. “Everybody wants to know how these animals can live so long. This kind of work can help us get to the answers.”

The research paper, "Recurrent evolution of extreme longevity in bats," Gerald S. Wilkinson and Danielle Adams, was published in the journal Biology Letters on April 10, 2019.