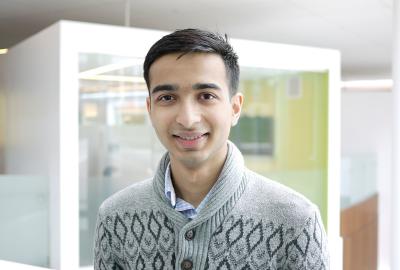 UMD was one of only three U.S. public universities to place in the top 10 at the 2018 William Lowell Putnam Mathematical Competition

A team of undergraduates from the University of Maryland placed ninth out of 568 teams and earned an honorable mention nod in the 2018 William Lowell Putnam Mathematical Competition, popularly called “the Putnam.”

“I am very proud of our Putnam team,” said Roohollah Ebrahimian, a senior lecturer in the UMD Department of Mathematics who coordinates the UMD Putnam team. “The Putnam is extremely challenging and the median score is often zero even though only the best students participate. Our team’s performance is nearly unprecedented in our history.”

The Putnam is the preeminent mathematics competition for undergraduate college students in the U.S. and Canada. During the competition, participants work individually to solve 12 mathematical problems.

“This was my fourth time taking the Putnam, and I’ve improved a lot since my first time—that’s what I’m most proud of,” said George, who received the UMD Department of Mathematics’ Carol Karp Award and Strauss Scholarship in 2018 and Daniel Sweet Undergraduate Research Fellowship Scholarship in 2017.

“I definitely think that these kinds of competitions help a lot with problem-solving,” said Joshua Fernandes, a Banneker/Key Scholar pursuing double degrees in mathematics and chemical engineering at UMD who wasn’t on UMD’s three-member team but ranked 180th in the competition. “To do the problems, you do need to know a lot of mathematical theorems and laws, but once you learn them, you still have to figure out how to apply them. That’s a skill that applies to anything.”

Before arriving at UMD, Fernandes, Metz and Rathore also participated in other mathematics contests including UMD’s High School Mathematics Competition, which Ebrahimian directs.

“The best part about doing math contests is the friends I’ve made,” said Rathore, another Banneker/Key Scholar who attended Montgomery Blair High School in Silver Spring, Maryland, with Fernandes. “I formed relationships with people with similar interests—my high school friends and I did the Maryland contest all four years.”

Now in its 40th year, UMD’s math competition was started by William E. “Brit” Kirwan, a past chair of UMD’s Department of Mathematics, a former chancellor of the University System of Maryland and the namesake of UMD’s mathematics building. Nearly 2,000 high school students participate every year in UMD’s exam, which attracts many of the best young mathematical minds in Maryland and Washington, D.C.

The multiday contest begins with a qualifier exam. Approximately 10 percent of students advance to a second exam held on a later date. In addition to cash prizes, the top three overall scorers are offered scholarships to UMD.

Sergey Brin (B.S. ’93, mathematics and computer science), co-founder of Google, was one such student, taking third place in 1990. The first-place winner that same year was Kiran Kedlaya, who went to Harvard University for college and is now the Stefan E. Warschawski Chair in Mathematics at the University of California, San Diego.

“All the colleges that I applied to had sponsored math competitions that I attended my senior year of high school,” said Metz, who won the UMD competition in 2014. “I chose to come to Maryland because of the math scholarship.”

Although next year’s UMD Putnam team will have a new face because George plans to graduate this spring, Ebrahimian is already excited for the next round of the contest.

“We will be holding weekly problem-solving sessions in the fall to prepare interested students,” Ebrahimian said. “We hope to do even better next year.”