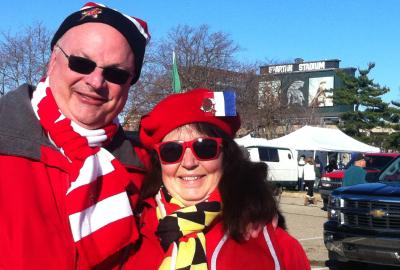 Science Terps Michael “Mike” and Lisa Flemming first met in fall 1980, in a hallway of the chemistry building on the University of Maryland campus—just before Lisa’s first chemistry test.

“I felt so stressed out about the test that I don’t actually remember meeting Mike,” said Lisa (B.S. ’84, biochemistry).

Fortunately, they soon met again, this time discovering that they lived in the same quad: Mike (B.S. ’83, biochemistry; B.S. ’88, computer science) lived in Cambridge Hall, while Lisa lived one building over in Centreville Hall.

The two became friends. For Lisa’s birthday during her freshman year, her roommates asked Mike to distract Lisa while they prepared a surprise party for her. So, Mike took Lisa out to dinner at the student union, where they enjoyed talking to each other so much that they nearly missed Lisa’s party.

“That was technically our first date,” Lisa said, “but Mike jokes that it wasn’t real because he was forced to take me out.”

The two have many happy memories of their undergrad days: playing intramural sports, suntanning on the football field and going to mixers at LaPlata beach. Mike also fondly remembers the campus farm, which was right next to his dorm.

“I used to chill out in the upper level of the barn, which no one else seemed to know about—sitting up there was my quiet place,” Mike said. “But you probably couldn’t do that anymore”

“People would tell me that I should move out after my first two years,” Lisa said. “I said, ‘No, I’d rather stay,’ because I loved all the camaraderie in the dorms.”

After Mike received his biochemistry degree, he worked in Baltimore as a laboratory technician at the University of Maryland’s medical and dental schools and then at a biotech startup called Nova Pharmaceutical Corp. Mike quickly realized that he did not enjoy bench science and decided to return to UMD for a degree in computer science.

Although the couple knew early on that they would one day marry, they could not afford to do so until Mike finished school and no longer needed to pay tuition.

“Mike proposed to me the day after his second graduation—May 15,” Lisa said. The two tied the knot on June 10, 1989, in Columbia, Maryland.

Mike worked for the National Security Agency (NSA) in Fort Meade, Maryland, in a co-op position while completing his computer science degree and continued working there for several years after his graduation. He then left the NSA and helped develop cybersecurity programs for the U.S. Postal Service before joining the security startup Riptech in 1999.

After the security company Symantec acquired Riptech in 2002, Mike co-founded Securicon, a company that provides information security for federal and commercial clients, including U.S. Cyber Command and the Department of Homeland Security, and many of the nation’s critical infrastructures. Today, Mike serves as Securicon’s president and chief operating officer.

Lisa worked as a laboratory technician at Johns Hopkins University after graduation. She soon moved on to the Environmental Protection Agency (EPA), where she worked for over a decade. After the U.S. Congress passed an act that created the EPA’s Toxic Release Inventory in 1986, Lisa traveled throughout the nation, training people including members of Congress on how to search the database of toxic chemical releases.

“We’ve certainly used all our Maryland degrees in our careers,” Mike said. “I also used my biochemistry degree a little for the government, but I can’t talk about it.”

As proud alumni, Mike and Lisa have given back to UMD over the years. They see it as an investment in education. Both are lifetime members of the UMD Alumni Association and their two sons graduated from the University System of Maryland: Ryan received a B.S. in computer science in 2015 from Towson University and Tyler (B.A. ’17, criminology and criminal justice) graduated from UMD.

“Maryland is our school and we would like to see it grow and continue for our children and future grandchildren,” Mike said.

Mike is also enthusiastic about supporting current UMD computer science students in their careers. For the past two years, Mike manned booths at job fairs on campus to recruit interns and employees for his company. In addition, through the UMD Alumni Association, Mike meets with other C-suite Terps to share and exchange support and professional development.

“When I started my own company, I didn’t have peers or mentors,” Mike said. “Now, I want to share my knowledge and experience with others to make that path a little easier.”

With their 30th wedding anniversary coming up this June, Mike and Lisa offered tips for a long marriage.

“Patience,” Lisa said. “That’s what has kept us together for so long.”