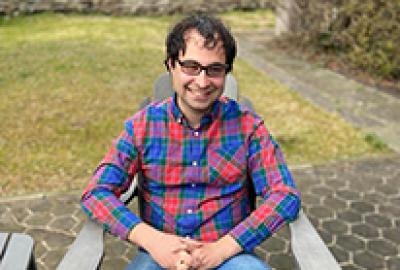 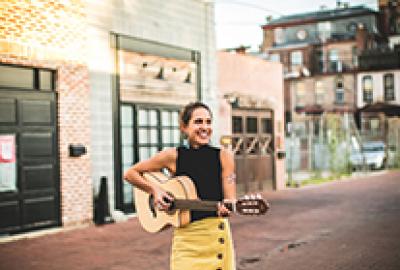 Ph.D. Student Appreciates Both the Abstract Beauty and Practical Application of Math
Musician Sheyda Peyman to release her debut album while conducting research for her doctoral dissertation.

S. Augusta “Gussie” Maccracken, a graduate student in the University of Maryland’s Department of Entomology, grew up in Ohio hunting for fossils in driveways and parking lots. She did not consider a career in fossils until her freshman year at Kenyon College in Gambier, Ohio. There, Maccracken took a geology class on a whim.

“My professor had been taking the class on a fossil hunt every year for five or six years,” said Maccracken, who was the first student in the class to find a fossil of a trilobite—a group of prehistoric marine animals that look like modern-day pill bugs. “After I found the fossil, I thought, ‘This is so much fun and I’m pretty good at it!’ So, I started moving my career in that direction.”

Maccracken transferred to Colorado College in Colorado Springs, Colorado, her sophomore year. After graduating with a B.S. in biology in 2011, Maccracken joined the Denver Museum of Nature & Science as an intern and then became a research staff member. She worked with all kinds of fossils but became especially interested in fossilized leaves and insects, which led her to read a paper by Conrad Labandeira, a curator of paleobiology at the Smithsonian’s National Museum of Natural History and former adjunct professor of entomology at UMD.

“I read his paper and said, ‘You can look at insect damage on fossil leaves? And learn about what insects were like in the past even without their fossils? That is the coolest thing!’” said Maccracken, who joined UMD as a graduate student in 2014. She is jointly advised by Labandeira and Jeffrey Shultz, an associate professor of entomology at UMD.

Maccracken surveys plant-insect interactions in ancient Laramidia. Laramidia was an island continent that eventually became western North America, from present-day Mexico to Alaska. Maccracken is using fossilized leaves to reconstruct Laramidian ecosystems during the Late Cretaceous Epoch, a geologic period approximately 100 to 66 million years ago that saw an explosion in plant diversity.

She has co-authored three publications as a graduate student. In a March 2018 paper published in the journal Royal Society Open Science, Maccracken and her co-authors proposed a set of guidelines for excavating, sampling, collecting and analyzing fossilized leaves.

Her most recent paper, which appeared in the October 2018 issue of the Journal of South American Earth Sciences, provides the first descriptions of insect damage to dinosaur bones found in the Cerro del Pueblo Formation, a 72 million-year-old geological formation in Coahuila, Mexico, which once resided in ancient Laramidia.

To find fossilized leaves and insects for her research, Maccracken regularly travels to Laramidian locations. Although digging for samples can be grueling, Maccracken says she loves the experience.

“You’re working your butt off. You’re sweaty and gross and stinky. And then you break open a rock to find a beautiful leaf,” Maccracken said. “At that moment, you realize you’re the first person to see this leaf and that it hasn’t seen the light of day in millions of years. You think about all the ecosystems that have come and gone during that time. It floors you.”

After bringing the fossils back to the laboratory—securely wrapped in what Maccracken calls the worst toilet paper in the world—she examines the leaves for signs of insect damage, such as holes, surface damage, piercings and chewing patterns. By examining the insect fossils, Maccracken can sometimes identify the insect down to the family or genus.

“We occasionally see ancient insects closely related to species that exist today,” Maccracken said. “When we put a picture of a fossil next to a modern insect, they are identical. It’s really amazing.”

Maccracken’s current collection from Coahuila, Mexico, includes about a thousand fossilized leaves. After analyzing several hundred of them, Maccracken estimated that the samples contain 20 types of leaves. In 2019, Maccracken hopes to dig several times and collect 5,000 leaves from a variety of locations in the formation to obtain a representative sample of the area.

“So far, we have seen relatively low diversity in the species of plants and the types of insect damage,” Maccracken said. “Now, we are trying to understand why that is the case.”

After completing her Ph.D., Maccracken would like to return to a museum to work on fossil collections. Currently, she collaborates with the Denver Museum of Nature & Science, analyzing fossilized leaves that she helped collect from the Grand Staircase-Escalante National Monument in Utah while previously working at the museum.

But, Maccracken remains open to other possibilities.

“I’ve had such a great time at UMD—I think being a professor would be fantastic, too,” Maccracken said.

The research paper, “The importance of sampling standardization for comparisons of insect herbivory in deep time: a case study from the late Palaeozoic,” Sandra Schachat, Conrad Labandeira and S. Augusta Maccracken, was published in the journal Royal Society Open Science on March 28, 2018.