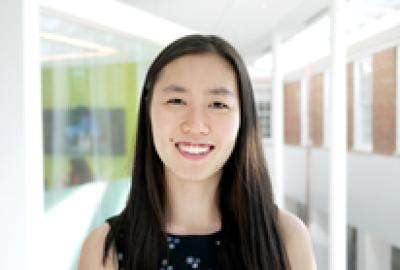 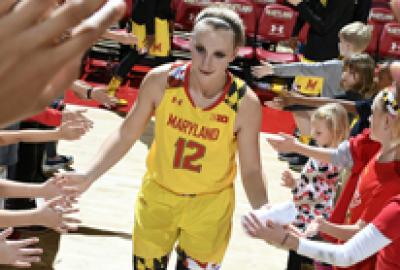 Senior Biological Sciences Major Kristen Confroy Excels on the Court and in the Classroom
A Big Ten Distinguished Scholar, Confroy will begin medical school at the Wake Forest School of Medicine in the fall.

Meet Science Terp Laila Abujuma: Nourishing the Campus and Beyond

A Banneker/Key Scholar and member of the Integrated Life Sciences program in the Honors College, Abujama hopes to study medicine after graduation

Laila Abujuma, a University of Maryland senior seeking double degrees in biological sciences and nutritional science, had a challenging first semester as she adjusted to life on campus.

“In my freshman year, days would go by that I didn’t go to the gym, and I was only eating things like pizza and chicken strips,” said Abujuma, who is also a Banneker/Key Scholar and member of the Integrated Life Sciences program in the Honors College. “I didn’t feel well internally or mentally. And one day in December near finals, I saw a Zumba class being offered and I thought, ‘You know what, let me go try it.’”

Abujuma enjoyed the class so much that she decided to go again the next day. And the next. From that point on, she began exercising regularly—and even became a fitness instructor at UMD Recreation and Wellness during her sophomore year. Abujuma also changed her eating habits to include more fruits, vegetables and lean protein. After a while, friends started noticing the changes in her lifestyle.

“People started asking me for advice on nutrition and wellness, and I didn’t have all the answers,” Abujuma said. “I started thinking about studying these topics as a second major, and I discovered that nutritional science worked very well with biological sciences.”

Abujuma’s interests led her to conduct her honors thesis research project with Robert Jackson, professor and chair of UMD’s Department of Nutrition and Food Science. She helped Jackson conduct a patient study on metabolic syndrome—a cluster of conditions such as obesity, high blood pressure and diabetes—at the Muslim Community Center Medical Clinic in nearby Silver Spring, Maryland.

At the clinic, Abujuma collected data including bone density, muscle mass and fat percentage from patients at the clinic. She also helped perform statistical analyses to determine which factors were most predictive of metabolic syndrome and obesity in the patients, most of whom were South Asian. The results, which suggest that visceral fat around the midsection measured by waist circumference is most predictive of metabolic syndrome in this population, have been submitted for publication in a peer-reviewed journal, with Abujuma as a co-author.

“It was a great experience for me because I got exposed to a clinical setting and I got to go through the research process,” Abujuma said. “I also loved working at that clinic because it served a very diverse group of patients. For instance, a lot of them didn’t speak English, so that gave me a lot of practice in communicating with people when there's a language barrier.”

Abujuma says the experience—observing Rashid Chotani, the executive director of the clinic, in particular—piqued her interest in becoming a primary care physician.

“Some of his patients told me that he’s the most amazing doctor they’ve ever had and that they’ve been seeing him for 30 years,” said Abujuma, who plans to take a year off before attending medical school. “I really like having long-term, one-on-one relationships with people and I’d love to be able to treat people throughout their life.”

Outside the clinic, Abujuma channeled her passion for wellness and working with people into service projects. For spring break in 2017, she took an Alternative Breaks trip to Huntington, West Virginia—an area with the highest obesity rates in the nation, according to a 2008 study from the Centers for Disease Control and Prevention.

“I found how hard it can to be to eat healthy food in a low-income community without a nearby grocery store,” Abujuma said. “We helped out at a facility that distributed free baskets of fruits and vegetables that would otherwise get thrown out by stores. I discovered that for some people, that was their groceries for the week. It was very eye-opening for me.”

That experience contributed to Abujuma’s decision to join Nourish: Mommy and Me, a student-led organization that provides weekly groceries, meals and recipes to low-income pregnant women.

“I love Nourish because we get to help pregnant women in need,” said Abujuma, who joined the organization in 2018. “Plus, I love cooking for other people. I spend all my money at grocery stores like Whole Foods.”

Abujuma is also a member of the UMD Muslim Students’ Association and Omicron Delta Kappa and a founding member of the Phi Delta Epsilon International Medical Fraternity.

For her service and academic accomplishments, Abujuma received the university’s 2018 Spirit of Maryland Award, which recognizes two students in the senior class who through their achievements have most exemplified the “spirit” of UMD. Criteria for the award include outstanding scholarship, leadership, campus involvement, community service and communication skills.

“I was really shocked, but it made me happy that other people thought I made an impact on this campus,” Abujuma said. “I’m the type of person that wants to leave my legacy wherever I go. Because of this award, I think I can say that I did so.”