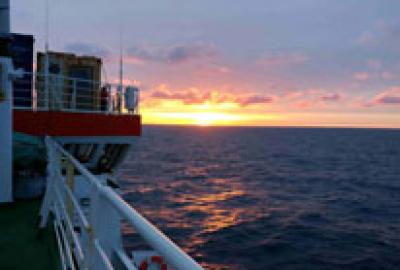 A Summer School Unlike Any Other
A Q&A with ESSIC’s Santiago Gassó, who spent a month at sea teaching remote sensing to graduate students from around the world. 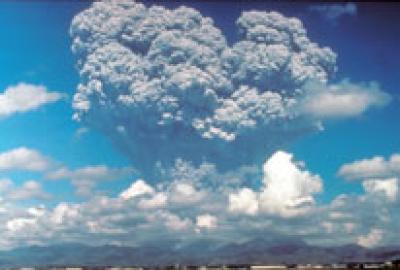 More than a century ago, British meteorologist Henry Blanford noted a connection between springtime snow cover on the Tibetan Plateau and Himalaya mountain range and the intensity of the summer monsoon season in India. Hundreds of studies have supported this relationship since Blanford first published his hypothesis in 1884, finding that less snow cover often correlates to a wetter monsoon. But so far, researchers have struggled to explain why this connection between snow cover and monsoon intensity exists.

New research led by William Lau, a research scientist at the University of Maryland’s Earth System Science Interdisciplinary Center (ESSIC), provides a plausible mechanism to explain Blanford’s observations. Surprisingly, the explanation involves dust transported from the deserts of the Middle East, more than a thousand miles away.

Using a powerful NASA-developed atmospheric model, Lau found that large quantities of dark aerosols—airborne particles such as dust and soot that absorb sunlight—settle on top of the Tibetan Plateau’s snowpack in spring before the monsoons begin. These dark aerosols cause the snow to absorb more sunlight and melt more quickly. The model findings suggest that, among these dark aerosols, windblown dust from the Middle East has the most powerful snow-darkening effect.

In years with heavy springtime dust deposition, the end result is reduced snow cover across the Tibetan Plateau, which leads to warmer temperatures on the ground and in the air above it. This in turn sets off a series of interconnected feedback loops that intensify India’s summer monsoon. A paper describing the research, co-authored by Kyu-Myung Kim of NASA’s Goddard Space Flight Center, was published online November 12, 2018 in the journal Atmosphere.

“Blanford knew that snow cover on the Tibetan Plateau wasn’t the only phenomenon that influenced the monsoon, but he knew it was important,” Lau said. “The relationship between snow cover and the monsoon is useful enough that the India Meteorological Departmentstill uses it to develop its annual summer monsoon forecast. By adding knowledge of the physical mechanism responsible for this relationship, our study may help to develop more accurate monsoon forecasts.”

Lau and Kim used the Goddard Earth Observing System Model, Version 5 (GEOS-5)to simulate 100 years’ worth of springtime snow cover and its influence on the yearly summer monsoon cycle. To test the effect of dust blown in from the Middle East, the researchers ran the same simulations again, with an added software package that incorporates the snow-darkening effects of dust, soot and other dark aerosols deposited atop the Tibetan Plateau.

Adding dark aerosol deposition to the model substantially increased the amount of sunlight absorbed by the snow, accelerating the rate of melting. This is because when snow melts, it begins to expose the darker ground underneath, which absorbs even more sunlight and intensifies the rate of melting.

In addition to darkening the snow early in the season, the dust also strongly enhanced atmospheric warming of the Tibetan Plateau, leading to changes in wind patterns that intensify the peak monsoon. Notably, this series of feedbacks also strengthened the same winds that transport dust from the Middle Eastern deserts, bringing more dust and further enhancing the feedback loop.

According to Lau, many researchers contend that heavy monsoon rains should wash any airborne dust particles from the air, canceling out the dust’s atmospheric heating effects and shutting down the feedback loop. But Lau and Kim’s results suggest that enhanced winds transport enough dust to overwhelm this washout effect, leading to a net accumulation of dust on the Tibetan Plateau.

The timing of the dust’s arrival was also important. Lau and Kim found the strongest effect in cycles when a large amount of dust settled on the snowpack in April, May and June.

“Every year was different in the model results. When dust arrived early in the season, it set up the initial conditions needed to change the monsoon dynamics,” Lau said. “But in some years, late-season snowstorms at high altitudes covered the dust and shut down the feedback loop. It’s very clear that there is a relationship between snow darkening by aerosols—particularly Middle Eastern desert dust—and the Indian monsoon season.”

Lau and Kim acknowledge the need to move beyond modeling and investigate the connections between dark aerosols, heating and the monsoon cycle using other methods and new observations. But they are confident that their results—which used real-world data to seed the GEOS-5 model—could help inform monsoon prediction efforts now.

“This could be extremely important for agriculture. Farmers have to plan around the monsoon season to decide when to plant and when to harvest,” Lau said. “In order to understand how human influences like climate change and land use affect the monsoon, we have to understand the basics—including the effects of light-absorbing aerosols in darkening the snow on the Tibetan Plateau and in modulating the Asian summer monsoon. Such effects are so important that in the end, we may have to rewrite the curriculum for ‘Monsoon 101.’”

The research paper, “Impact of snow-darkening by deposition of light-absorbing aerosols on snow cover in the Himalaya-Tibetan-Plateau and influence on the Asian Summer monsoon: A possible mechanism for the Blanford Hypothesis,” William Lau, and Kyu-Myong Kim, was published in the journal Atmosphereon November 12, 2018.

This work was supported by NASA (Award No. 5260472) and the U.S. Department of Energy (Award No. 4313621). The content of this article does not necessarily reflect the views of these organizations.