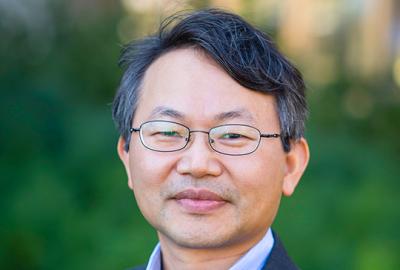 Jarzynski was honored for outstanding research in theoretical statistical physics

The American Physical Society awarded its 2019 Lars Onsager Prize to Christopher Jarzynski, a Distinguished University Professor in the University of Maryland’s Department of Chemistry and Biochemistry, Department of Physics, and Institute for Physical Science and Technology (IPST). Jarzynski will receive the prize, which recognizes outstanding research in theoretical statistical physics, at the society’s March Meeting 2019 in Boston.

“This particular award is very special to me because it’s named after Onsager, who was a real giant in theoretical statistical physics and is viewed as a founder of nonequilibrium statistical physics—the field that I work in,” Jarzynski said.

The award also demonstrates UMD’s strength in statistical physics, as the first Lars Onsager Prize was awarded in 1995 to Michael Fisher, a Distinguished University Professor Emeritus in IPST.

Statistical physicists use the tools of mathematics and statistics to investigate how atoms and molecules physically behave at extremely small scales, such as in quantum systems. More specifically, Jarzynski analyzes artificial molecular machines, develops efficient ways to compute the thermodynamic properties of complex systems and applies statistical physics to problems in biophysics.

“Because my work lies on the border of chemistry and physics, it’s been really helpful for me to be at an institute where there are other people with interdisciplinary interests,” said Jarzynski, who is also director of IPST. “IPST brings together really wonderful colleagues who are generous with their time and effort.”

In May 2018, Jarzynski co-authored a study published in the journal Nature Physics that devised and demonstrated a new way to measure “free energy”—the energy available to any system to perform useful work—in extremely small systems. By using microscopy to track and analyze the fluctuating motion or configuration of single molecules or other small objects, the new method can be applied to a greater variety of systems than previous techniques.

Going forward, Jarzynski plans to conduct research at the intersection of statistical mechanics—using probability and statistics to model the behavior of particles—and quantum physics. He will examine the fundamental constraints that the laws of thermodynamics place on information processing in quantum systems as well as investigate how to control and manipulate quantum systems.

Of the nearly 100 papers that Jarzynski has published, the most cited is a 1997 paper published in the journal Physical Review Letters. In this paper, Jarzynski described a method of expressing the second law of thermodynamics—which states that the level of disorder in the universe can only increase—for systems at the molecular scale.

“That was my very first paper in statistical physics,” said Jarzynski, who wrote and submitted the sole-author paper while a research associate at the Institute for Nuclear Theory based at the University of Washington. “After I published that result, I came up with further questions and I’ve stayed in that field for the last 20 years.”

The paper proved influential for the field of statistical physics: thousands of papers cite it and an equation in the paper became known as the Jarzynski equality.

“At first, there was some question of whether my paper was just a theoretical prediction,” Jarzynski said. “But a few years later, experiments started verifying my work.”

Then, when the 2018 Nobel Prize in physics was awarded for inventions in laser physics, the Nobel Committee for Physics specifically cited testing the Jarzynski equality as an application of one of the winning inventions—optical tweezers. Optical tweezers use laser beams to manipulate extremely small objects such as biological molecules.

The equality has now been verified in many systems, including quantum mechanical systems. In 2014, scientists helped verify the Jarzynski equality with a trapped ion system and published the results in the journal Nature Physics. The study’s authors included two former UMD postdocs—Kihwan Kim, an associate professor in the Institute for Interdisciplinary Information Sciences at Tsinghua University in Beijing, and Haitao Quan, an assistant professor of physics at Beijing’s Peking University.

The opportunity to recruit postdocs like Quan and promising graduate students to his lab was a key reason that Jarzynski moved to UMD in 2006 from the Los Alamos National Laboratory, where he worked for the preceding decade.

“The thing I’m most proud of here at Maryland is having built my own research group,” Jarzynski said. “I’ve been very fortunate in having terrific students and postdocs, many of whom are now in academic positions.”

One of those students will also be honored at the March Meeting alongside Jarzynski. Jordan Horowitz (Ph.D. ’10, physics), who is now a postdoctoral fellow in physics at the Massachusetts Institute of Technology and will soon start a position as an assistant professor at the University of Michigan, will receive the Irwin Oppenheim Award, which recognizes outstanding contributions to physics by early career scientists who publish in the journal Physical Review E.

The paper, “Equilibrium free energies from non-equilibrium trajectories with relaxation fluctuation spectroscopy,” David Ross, Elizabeth Strychalski, Christopher Jarzynski and Samuel Stavis, was published in the journal Nature Physics on May 28, 2018.

The paper, “Nonequilibrium equality for free energy differences,” Christopher Jarzynski, was published in the journal Physical Review Letters on April 7, 1997.