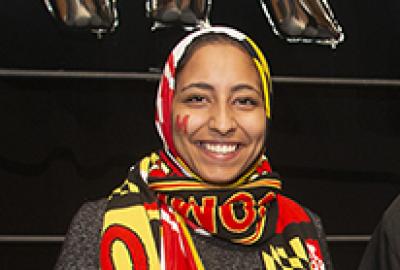 Lillian Sun’s brother was born when she was in high school, and she credits him with influencing her to attend the University of Maryland.

“I came here because I wanted to be able to watch him grow up. My family is very important to me,” said Sun, who grew up in nearby Bethesda, Maryland. “It also didn’t hurt that I received a Banneker/Key Scholarship.”

Sun, an Integrated Life Sciences Honors College junior pursuing a double degree in biological sciences and economics, wants to be a medical researcher after she graduates.

“The first doctor in my family was my maternal grandmother,” Sun explained. “She was an OB-GYN in China back when women doctors were really rare. She started this chain reaction where a lot of people in my family decided to study medicine and science.”

Sun became interested in economics on her own, but found that it led her back to medicine.

“I wanted to study economics after reading a lot of books by Albert Hirschman, an incredible economist who is my idol,” Sun said. “At first, I thought economics was completely unrelated to biology, but it turns out economics techniques can give you insights in situations where you can’t perform experiments. I think that will be very handy if I go into medicine.”

Sun’s first experience with medicine occurred during high school when she interned at the National Cancer Institute’s Office of Cancer Complementary and Alternative Medicine. There, Sun screened a library of herbal compounds for potential use in chemotherapy.

“I chose that internship because of my parents,” Sun said. “They’re both life scientists but have some traditional Chinese beliefs about health. Although I don’t share those same beliefs, I did learn from the internship how alternative and complementary medicine can be useful, especially in palliative care.”

The experience also grew Sun’s interest in cancer research. From May to December 2016, she interned with Carter Van Waes, a senior investigator at the National Institute on Deafness and Other Communication Disorders (NIDCD). Sun researched the effectiveness of certain antibodies in immunotherapy—treatments that stimulate a patient's immune system—for head and neck cancers.

In December 2016, Sun joined the laboratory of Clint Allen, an otolaryngology surgeon-scientist at the NIDCD. In Allen’s group, Sun found a way to make a specific type of immunotherapy more effective in the laboratory by first treating cancer cells with chemotherapy drugs.

“This finding surprised us because usually, chemotherapy makes immunotherapy treatments less effective because chemo drugs kill immune cells along with cancer cells,” Sun explained. “Now, we’re working on a deeper understanding of the mechanism behind this effect.”

As a result of her work in Allen’s laboratory, Sun co-authored two papers published in the journal OncoImmunology and submitted two more papers for publication, including a first-author paper.

“During the process of carrying out the experiments and doing literature searches, I fell in love with science,” said Sun, who continues to conduct research in Allen’s laboratory today. “The experience really made me think that medical research is something I want to do down the line.”

In addition to conducting cancer research in the laboratory, Sun also met cancer patients while shadowing doctors at the National Institutes of Health’s Clinical Center. There, she saw patients recover, but she also witnessed patients finding out that they were dying.

“I have seen seasoned physicians break down crying from telling a patient that their days are numbered,” Sun said. “In those moments when medicine fails, I feel that I must work harder to expand therapeutic options for patients.”

Sun plans to apply to a dual M.D./Ph.D. program after graduation so that she can continue seeing patients in the clinic in addition to working in the laboratory.

This fits with Sun’s history of helping those in need. As a member of the UMD chapter of the American Medical Student Association from 2015 to 2016, Sun volunteered at a soup kitchen and a food recovery program. When Sun became the association’s co-president in 2017, she led the development of two service programs that promote better nutrition and destigmatize mental illness among UMD students.

“My friends and I started Terps for New Horizons when we heard a lot of xenophobic rhetoric,” Sun said. “We wanted to show some solidarity against that.”

In 2017, Terps for New Horizons organized free English lessons for refugee families, complete with rides to campus and child care. The organization also sent a number of blank banners to college campuses including UMD, asking students to fill them with welcome messages for refugees—which they did. The canvases became Project Welcome.

“We got about 50 canvases back and they were covered in great messages,” Sun said. “We also got a really positive response from student refugees here on campus. Seeing so much support for them was really powerful.”

“Dr. Allen is planning a clinical trial, which would be really exciting!” Sun said.