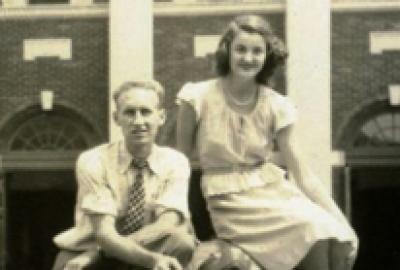 Alumni Climate Crusaders
Learn how our alumni are fighting for a better future.

The couple, who married in 1966, provide need-based scholarships for undergraduates in the College of Computer, Mathematical, and Natural Sciences who are preparing to be K-12 science or math teachers

Barrett “Barrie” Ripin (Ph.D. ’71, physics) met his wife Marilyn (B.S. ’66, M.S. ’69, Ph.D. ’71, microbiology) at the University of Maryland in 1964—when women were not allowed to wear pants on campus and admissions requirements were very different.

“At the time, all you needed to get in to the University of Maryland was a diploma from a high school in Maryland,” said Marilyn, who graduated from Oxon Hill High School in Prince George’s County. “It was also the only university that I could afford. But after coming here, I just loved it. This school put me on a trajectory for the rest of my life.”

That trajectory included meeting Barrie in a physics course; she was an undergraduate and he was a teaching assistant.

“I wasn’t Marilyn’s teaching assistant, but I still waited until she left the class before dating her,” said Barrie, who attended UMD for graduate school after completing his bachelor’s degree in physics at Rensselaer Polytechnic Institute in Troy, New York.

A year after they started dating, “Operation Match”—the first computer dating service in the U.S.—swept college campuses. Users mailed in a questionnaire about their relationship preferences and personal attributes along with a $3 fee. The service used punch cards to compute a list of potential compatible matches for each user. Marilyn and Barrie both participated without telling the other. The result: they appeared on each other’s match lists.

“There were around 70,000 people in the whole thing. What were the odds?” Marilyn marveled. “At first, we were both too embarrassed to admit what we had done. But we were already dating anyway, so when we saw that we were supposed to be compatible, we decided to get married!”

The couple married in 1966. After completing their Ph.D. degrees, they moved around the U.S. while Barrie was a postdoc, but returned to Maryland when Barrie began working at the U.S. Naval Research Laboratory in Washington, D.C.

At the Naval Research Laboratory, Barrie conducted plasma physics experiments aimed at achieving nuclear fusion in the laboratory. He also served as an associate executive officer of the American Physical Society, as an American Institute of Physics State Department science fellow and as an adjunct professor in the Department of Physics and Astronomy (now separate departments) at UMD.

For several years, Marilyn stayed home with her two sons, David and Daniel, who were born in 1970 and 1973, respectively. During those years, she held part-time jobs including a position as an adjunct assistant professor in the UMD Department of Microbiology (now the Department of Cell Biology and Molecular Genetics).

“In the ’70s, child care wasn’t as organized as it is now,” Marilyn said. “I decided to stay home until my youngest started elementary school. As a result, I did not have much of an opportunity to become a scientist in academia. I don’t have regrets, but I’m glad that times are changing now and there are more choices for women.”

Marilyn’s career highlights include being a branch chief and program manager at the Department of Energy as well as starting her own company, Echo Technologies Inc., which developed detection systems for biological agents.

The couple have not forgotten where their journey started. In 2014, they established the Marilyn and Barrett Ripin TerpStart Endowed Scholarship for CMNS Terrapin Teachers Students, which provides need-based scholarships for undergraduates participating in the Terrapin Teachers program in the College of Computer, Mathematical, and Natural Sciences (CMNS). Terrapin Teachers prepares students not only to pursue a wide variety of careers in their science major, but also to teach science or math in middle or high schools.

“Everyone has that teacher that made a difference in their life,” Marilyn said. “I had a high school biology teacher who made me want to be a biologist. But it hasn’t been our experience that all science teachers know enough science. That is why we love the idea of scientists teaching.”

“A lot of teachers are afraid of science,” Barrie added. “When kids ask questions, those teachers often look for a fact or an answer, which is not the point of science. Programs such as Terrapin Teachers help develop teachers who are not afraid to say ‘that’s a good question, can you think of some ways to find out how it works?’”

Now retired, Marilyn serves on the CMNS Board of Visitors and participates in service activities such as helping refugees through Temple Shalom in Chevy Chase, Maryland. Barrie enjoys painting and sculpting. They also have season tickets to the University of Maryland women’s basketball games, an interest that Marilyn developed while an undergraduate living in St. Mary’s Hall, a dorm located across the street from Cole Field House.

The pair recently celebrated their 50th anniversary at a party with friends and family. They have four granddaughters, and the oldest is at the University of Rochester studying physics like her uncle Daniel and her grandfather.

The couple said the secret to a long-lasting union is pretty simple.

“Enjoy each other,” Barrie added.