The Honorable C. Thomas McMillen and Mitchell Rock to Speak at College’s Spring Commencement Ceremony
McMillen received his B.S. in chemistry in 1974 from UMD and Rock is graduating with dual bachelor’s degrees in biological sciences and government and politics. 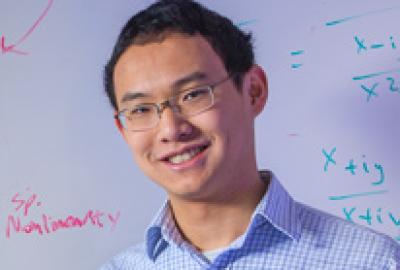 Biological Sciences Senior Fang Cao to Speak at College's Spring Commencement
The university's first Rhodes Scholar in four decades, Cao will study pharmacology at the University of Oxford this fall.

Jagdeep Singh and Boyan Xia will speak at the University of Maryland College of Computer, Mathematical, and Natural Sciences Spring Commencement Ceremony. The ceremony will be held on May 22, 2017, at 4 p.m. at the Xfinity Center on campus.

Singh (B.S. ’86, computer science and economics) is an entrepreneur and technologist based in Silicon Valley. He is the co-founder and CEO of QuantumScape Corporation, a startup developing a new class of energy storage devices.

Prior to founding QuantumScape, Singh worked at Hewlett-Packard and Sun Microsystems before launching several companies of his own. He was the co-founder and CEO of Infinera Corporation, developer of the world’s first large-scale photonic integrated circuits and optical communications systems. Singh led the company from startup through volume shipments, an IPO and a multi-billion dollar market capitalization. The company’s products now generate $800 million in annual revenue and are deployed by major communications carriers worldwide.

Singh served on the Stanford Graduate School of Business Advisory Board from 2004 to 2006 and currently serves on the Policy Board of Energy Sciences Network, a high-performance computing network funded by the U.S. Department of Energy and managed by Lawrence Berkeley National Laboratory.

Singh has received numerous honors for his contributions to the communications industry, including being named the Light Reading Person of the Year (2007) and the Ernst and Young Entrepreneur of the Year (2008). He holds an M.S. in computer science from Stanford University and an M.B.A. from the University of California, Berkeley. He is a supporter of the University of Maryland College of Computer, Mathematical, and Natural Sciences’ Brendan Iribe Center for Computer Science and Innovation, currently under construction on the College Park campus.

University of Maryland Philip Merrill Presidential Scholar Boyan Xia was a member of the Integrated Life Sciences Program in the Honors College. She is graduating with a bachelor’s degree in biological sciences with a specialization in physiology and neurobiology and a minor in statistics.

Xia actively pursued research both on- and off-campus, including work on experience-dependent structural plasticity in the larval fruit fly (Drosophila melanogaster) visual system at the National Institute of Neurological Disorders and Stroke in Bethesda, Maryland. She also contributed to clinical research at the UMD Medical Center’s R. Adams Cowley Shock Trauma Center in Baltimore, where she studied the various aspects that make up a successful ad hoc trauma team. On campus, Xia worked with Fischell Department of Bioengineering Assistant Professor Christopher Jewell to create novel drug-delivery platforms that might contribute to more effective treatments for autoimmune diseases such as multiple sclerosis. This work earned Xia the Howard Hughes Medical Institute Undergraduate Fellowship.

Xia volunteers at the Silver Spring Community Clinic, Inc., and at the Baltimore Rescue Mission Clinic. Xia has been part of the University of Maryland Student Government Association’s Health and Wellness committee, which works to improve the overall campus experience for students. She has also worked as a laboratory teaching assistant for organic chemistry.

Xia will work as a postbaccalaureate researcher at the National Institutes of Health this fall and plans to pursue a career in medicine.