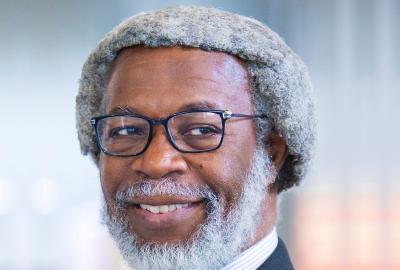 Sylvester James Gates, Jr. Returns to UMD Faculty as Clark Leadership Chair in Science
He will hold a joint appointment in the Department of Physics and School of Public Policy.

Alumni Climate Crusaders
Learn how our alumni are fighting for a better future.

While most students leave College Park for the summer, some opt to stay and take advantage of the many summer programs offered at the University of Maryland. One such program—the Summer Student Theoretical Physics Research Session (SSTPRS)—offers a summerlong experience for students interested in conducting scientific research.

The program traces its beginnings back to 1999, when the idea came to S. James Gates Jr., a Distinguished University Professor and Regents Professor of Physics at UMD known for his pioneering work in supersymmetry and supergravity, areas closely related to string theory.

In the 1990s, Gates often collaborated with Vincent Rodgers, a professor of physics and astronomy at the University of Iowa. In 1999, Rodgers brought along an undergraduate student to assist with their research project. At first, Gates was unsure how much she would be able to contribute, but her level of participation surprised him.

“I had such a great time working with her that I realized it was possible to involve undergraduates in my research. You just have to put in a different type of effort than with graduate students,” said Gates, who directs the SSTPRS program. “It was an eye-opening experience for me. Undergraduates with a deep interest in mathematics and physics are full of contagious energy.”

The goal of the program is not to teach students physics, but rather to allow students to explore areas of theoretical physics and publish refereed journal articles on their research findings. However, as Gates points out, becoming a published author is not guaranteed.

To date, undergraduates have co-authored more than 17 publications with Gates. The students also learn to collaborate on a project and think outside of the classroom, according to Gates.

Attendance for the program varies from year to year, primarily because it relies on word-of-mouth to attract students. This year, 14 students are participating in the program, creating a close-knit group. Benedict Mondal, who participated in the program last summer and is pursuing a double degree in physics and mathematics, said the small number of participants encourages tangential conversations with people who happen to walk by.

“The fact that we have so many knowledgeable people coming and going to whom we can ask questions and get answers, or at least guidance on answers, is incredible,” Mondal said.

Many of the research topics being explored by the undergraduates are not usually introduced until the graduate level. One topic the students agree has been the most interesting is Lie groups. Lie groups represent the best-developed theory of continuous symmetry of mathematical objects and structures.

“My favorite part is the fast-paced learning environment,” said Daniel Lay, who is pursuing a double degree in physics and mathematics. “There’s always something new that keeps me asking, ‘How does one thing interact with another?’”

The program has gained a wide reach, attracting students from institutions including MIT, Brown University and Stanford University.

“The program provides practice with basic technical tools, so regardless of a particular problem the skill sets you learn are applicable to a broad range of research opportunities,” said Isaac Friend, a mathematics major at the University of Chicago and 2016 program participant.

Gates will begin his 44th year of teaching this fall and hopes to continue teaching until he reaches at least 50 years.

“The idea that I have been able to establish a place where students can play and explore intellectual topics, while also creating a foundation for their futures, is just amazing,” said Gates.