A Hub for Collaboration

Environmental security sits squarely at the nexus where natural and physical sciences overlap with sociology and public policy. As such, finding common ground amongst these various perspectives requires an interdisciplinary approach. The University of Maryland is particularly well-equipped for this challenge, with several centers and an institute that serve as hubs for collaboration with federal agencies and others within the academic community.

The university’s Earth System Science Interdisciplinary Center (ESSIC) is a joint center between UMD’s Departments of Atmospheric and Oceanic Science, Geology, and Geographical Sciences, initiated under a $36 million cooperative agreement with NASA’s Goddard Space Flight Center. ESSIC cuts across the traditional disciplinary boundaries of meteorology, oceanography, geology and geography, in an effort to better understand how the land, oceans and atmosphere influence one another. 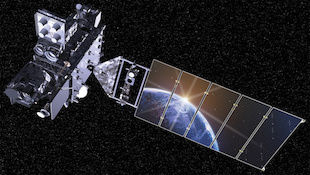 ESSIC also manages the Cooperative Institute for Climate and Satellites (CICS), created in 2009 through a $93 million agreement with the National Oceanic and Atmospheric Administration (NOAA). Originally founded in 1984, CICS is now housed within one center in College Park (CICS-MD) and another in Asheville, North Carolina (CICS-NC). The institute aims to enhance NOAA’s ability to use satellite observations and Earth system modeling to advance major national climate research goals.

CICS will support the science goals of two vital upcoming satellite missions, both of which are collaborative efforts between NOAA and NASA.

ESSIC Director Antonio Busalacchi will soon play a crucial role in guiding the future of the nation’s satellite infrastructure, having recently been named co-chair of the National Research Council’s Decadal Survey for Earth Science and Applications from Space. The survey committee will develop priorities and support satellite observation activities for NASA, NOAA and the U.S. Geological Survey from 2018 through 2027.

“The National Weather Service has embarked on an effort to build a ‘Weather-Ready Nation’ that will increase community resiliency in the face of vulnerability to extreme weather, water and climate events,” says Louis Uccellini, director of the National Weather Service (NWS). “The University of Maryland and its various research entities, including ESSIC and CICS, have long-standing collaborations with the NWS across the weather, water and climate disciplines. Indeed, as we advance the NWS’ abilities to provide improved operational forecasts, our links to ESSIC and CICS will grow even stronger.”

The National Socio-Environmental Synthesis Center (SESYNC), based in Annapolis, Md., takes a slightly different approach to tackling environmental security topics. Funded by a $27 million award to UMD from the National Science Foundation, SESYNC brings together social, natural and computational scientists with resource managers and decision-makers to identify data-driven solutions to society’s most challenging and complex environmental problems. SESYNC researchers are encouraged to work directly with stakeholders to co-develop research questions that address the intersection between human society and natural ecosystems.