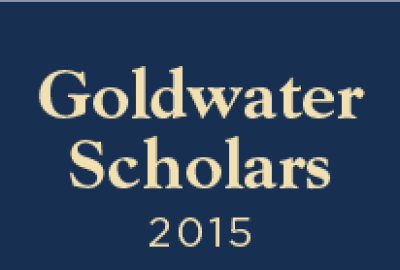 For the second consecutive year, four University of Maryland students have been awarded scholarships by the Barry M. Goldwater Scholarship and Excellence in Education Foundation, which encourages students to pursue advanced study and careers in the sciences, engineering and mathematics. UMD is one of only five institutions with their four nominees all named scholars. The other schools are Cornell University, Stanford University, the University of North Texas and the University of Wisconsin-Madison.

UMD sophomore Yousuf Khan and juniors Adam Berger, Katherine Cordwell and Mark Moretto were among the 252 Barry Goldwater Scholars selected from 1,150 students nominated nationally this year. The four students, who are all members of the UMD Honors College, plan to pursue doctoral degrees in their area of study and become university professors or researchers at government laboratories.

This past February, Berger presented findings on the use of Raman spectroscopy to monitor wound healing in members of the military at the SPIE Photonics West conference. He conducted this research over the past three summers with Nicole Crane in the Regenerative Medicine Department at the Naval Medical Research Center.

Back on campus, Berger and his Gemstone team are biochemically modifying small-diameter vascular grafts made of silk scaffolds to enhance the grafts’ biocompatibility and mechanical strength.

Berger is also investigating methods for using surface-enhanced Raman spectroscopy (SERS) to detect THC, the chemical responsible for most of marijuana’s psychological effects, in saliva in the laboratory of UMD Fischell Department of Bioengineering Associate Professor Ian White. In addition, Berger is testing paper-based SERS biosensors for antibiotic detection, a topic on which he co-authored a book chapter.

“Adam’s leadership and personal skills are polished, his professional and intellectual communication skills are superb, his dedication to academic research is extraordinary and his work ethic is unmatched,” said White.

Katherine Cordwell—a mathematics and computer science double major who is also a member of the University Honors Program and a Banneker/Key and National Merit Scholar—became deeply interested in mathematics in high school.

An Intel Science Talent Search finalist, Cordwell also won a first place award in mathematics at the International Science and Engineering Fair. Her early work, conducted with mentorship from MIT Mathematics Professor Pavel Etingof, led to a co-authored paper in the Journal of Algebra.

At UMD, Cordwell has continued to pursue diverse research projects in theoretical and applied mathematics and cryptography with faculty members that include Computer Science Professor Jonathan Katz and Mathematics Professor John Benedetto.

She delivered her research conducted last summer with Mikhail Chebotar, associate professor of mathematical sciences at Kent State University, and George Wang, an undergraduate at the University of Southern California, as an oral presentation at the Joint Mathematics Meetings in January and co-authored a paper on the work that was recently published in the journal Linear Algebra and its Applications.

“It is very rare for an undergraduate in mathematics to publish a research paper at all, thus it is very impressive that Katherine has published in two journals of this level,” said UMD Professor of Mathematics Lawrence Washington.

Yousuf Khan—a biological sciences major specializing in cell biology and genetics, who is also a Banneker/Key Scholar and a member of the Integrated Life Sciences honors program—is interested in understanding how non-coding RNAs control gene expression.

Since May 2014, he has been conducting research in the laboratory of Jonathan Dinman, chair of the UMD Department of Cell Biology and Molecular Genetics. In the lab, Khan’s first task involved cloning sequences suspected of being able to reprogram the genetic code.

“Normally, I consider it a victory if a new student can succeed in cloning one of these after a year’s time,” said Dinman. “Yousuf cloned three within the first month, and then went on to clone another 10 the next month.”

At that point, Dinman challenged Khan to move to the next level to determine whether any of the sequences had the frameshifting function. This required Khan to learn new skills, including mammalian tissue culture and statistical data analysis. Again, Khan mastered these within a month and validated a good number of new frameshifting sequences, according to Dinman. The outcome of Khan’s work includes co-authorship of three papers that are being submitted for publication this year.

Mark Moretto, who is pursuing double degrees in aerospace engineering and astronomy and is a member of the University Honors Program, began conducting research with UMD astronomers while in high school and was named an Intel Science Talent Search semifinalist for his early work.

Collaborating with Michael A’Hearn and Lori Feaga in the UMD Department of Astronomy since 2013, Moretto has been examining infrared spectral data acquired during the Deep Impact mission to understand the volatile composition of comet Tempel 1. He gave a talk on his findings at the American Astronomical Society Division for Planetary Sciences meeting last November and is currently preparing to submit a journal article on this research.

“Mark is one of the most remarkable students I have encountered in my career for his combination of both ability and purpose,” said A’Hearn, a Distinguished University Professor Emeritus of astronomy at UMD.

This summer, Moretto will be interning at the Jet Propulsion Lab. And for his honors thesis, Moretto will design and test anchoring mechanisms for small bodies, which include moons, comets and asteroids. Combining his interests in engineering and astronomy, Moretto hopes to advance robotic exploration of the solar system.

The Goldwater Scholarship program was created in 1986 to identify students of outstanding ability and promise in science, engineering and mathematics, and to encourage their pursuit of advanced study and research careers. The Goldwater Foundation has honored 55 University of Maryland winners since the program’s first award was given in 1989. Prior Goldwater scholars and nominees from UMD have continued their impressive academic and research pursuits at leading institutions around the world and have garnered additional recognition as: