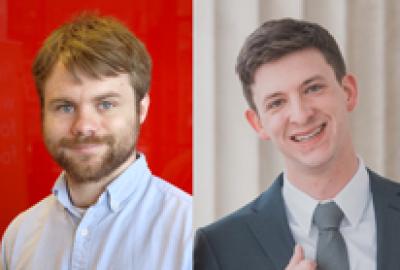 The Achievement Rewards for College Scientists (ARCS) Foundation has awarded four students from the University of Maryland College of Computer, Mathematical, and Natural Sciences with scholarships for the 2015-2016 school year. Each scholar is a merit award winner currently pursuing significant research in the sciences. The honorees will attend a reception at the National Academy of Sciences headquarters building in the District of Columbia on Oct. 15, 2015.

This year's scholars include:

Collins traps ions and uses their internal states as a basis for quantum computations to solve or simulate problems that are difficult to evaluate using a classical computer. She is a first-year scholar.

Greeley uses airborne green laser altimeters to measure surface elevations of glaciers, ice sheets and sea ice to quantify the uncertainty in elevation measurements from scattering green light in snow and ice. He is a first-year scholar.

Lee uses physics techniques to measure the collective migration of cells and the dynamics of collectively migrating cells to determine how cancer cells spread throughout the body. Lee received bachelor of science degrees in physics and chemical engineering from the University of Arkansas. She is a third-year scholar.

Sengupta examines the mechanisms of synaptic loss and recovery in the aging visual system, and develops novel tools for experimental tracking of functionally active synapses. She is a first-year scholar.

Since 1998, 70 University of Maryland students have been designated ARCS Scholars, receiving over $1 million in support from the Metro Washington chapter of ARCS for their outstanding work. Visit the ARCS website to learn more about the ARCS scholar program, including requirements for application.