Wriggle your toes in a marsh’s mucky bottom sediment and you’ll probably inhale a rotten egg smell, the distinctive odor of hydrogen sulfide gas. That’s the biochemical signature of sulfur-using bacteria, one of Earth’s most ancient and widespread life forms.

Among scientists who study the early history of our 4.5 billion-year-old planet, there is a vigorous debate about the evolution of sulfur-dependent bacteria. These simple organisms arose at a time when oxygen levels in the atmosphere were less than one-thousandth of what they are now. Living in ocean waters, they respired (or breathed in) sulfate, a sulfur and oxygen compound,  instead of free oxygen molecules. But how did that sulfate reach the ocean, and when did it become abundant enough for living things to use it?

New research by University of Maryland geology doctoral student Iadviga Zhelezinskaia offers a surprising answer. Zhelezinskaia is the first researcher to analyze the biochemical signals of sulfur compounds found in 2.5 billion-year-old carbonate rocks from Brazil. The rocks were formed on the ocean floor in a geologic time known as the Neoarchaean Eon. They surfaced when prospectors drilling for gold in Brazil punched a hole into bedrock and pulled out a 590-foot-long core of ancient rocks.

In research published Nov. 7, 2014 in the journal Science, Zhelezinskaia and three co-authors—physicist John Cliff of the University of Western Australia and geologists Alan Kaufman and James Farquhar of UMD—show that bacteria dependent on sulfate were plentiful in some parts of the Neoarchaean ocean, even though sea water typically contained about 1,000 times less sulfate than it does today.

“The samples Iadviga measured carry a very strong signal that sulfur compounds were consumed and altered by living organisms, which was surprising,” says Farquhar. “She also used basic geochemical models to give an idea of how much sulfate was in the oceans, and finds the sulfate concentrations are very low, much lower than previously thought.”

Geologists study sulfur because it is abundant and combines readily with other elements, forming compounds stable enough to be preserved in the geologic record. Sulfur has four naturally occurring stable isotopes—atomic signatures left in the rock record that scientists can use to identify the elements’ different forms. Researchers measuring sulfur isotope ratios in a rock sample can learn whether the sulfur came from the atmosphere, weathering rocks or biological processes. From that information about the sulfur sources, they can deduce important information about the state of the atmosphere, oceans, continents and biosphere when those rocks formed.

Farquhar and other researchers have used sulfur isotope ratios in Neoarchaean rocks to show that soon after this period, Earth’s atmosphere changed. Oxygen levels soared from just a few parts per million to almost their current level, which is around 21 percent of all the gases in the atmosphere. The Brazilian rocks Zhelezinskaia sampled show only trace amounts of oxygen, a sign they were formed before this atmospheric change.

With very little oxygen, the Neoarchaean Earth was a forbidding place for most modern life forms. The continents were probably much drier and dominated by volcanoes that released sulfur dioxide, carbon dioxide, methane and other greenhouse gases. Temperatures probably ranged between 0 and 100 degrees Celsius (32 to 212 degrees Fahrenheit), warm enough for liquid oceans to form and microbes to grow in them.

Rocks 2.5 billion years old or older are extremely rare, so geologists’ understanding of the Neoarchaean are based on a handful of samples from a few small areas, such as Western Australia, South Africa and Brazil. Geologists theorize that Western Australia and South Africa were once part of an ancient supercontinent called Vaalbara. The Brazilian rock samples are comparable in age, but they may not be from the same supercontinent, Zhelezinskaia says.

Most of the Neoarchaean rocks studied are from Western Australia and South Africa and are black shale, which forms when fine dust settles on the sea floor. The Brazilian prospector’s core contains plenty of black shale and a band of carbonate rock, formed below the surface of shallow seas, in a setting that probably resembled today’s Bahama Islands. Black shale usually contains sulfur-bearing pyrite, but carbonate rock typically does not, so geologists have not focused on sulfur signals in Neoarchaean carbonate rocks until now. 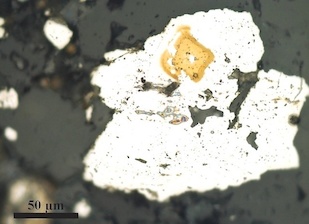 Zhelezinskaia “chose to look at a type of rock that others generally avoided, and what she saw was spectacularly different,” said Kaufman. “It really opened our eyes to the implications of this study.”

The Brazilian carbonate rocks’ isotopic ratios showed they formed in ancient seabed containing sulfate from atmospheric sources, not continental rock. And the isotopic ratios also showed that Neoarchaean bacteria were plentiful in the sediment, respiring sulfate and emitted hydrogen sulfide—the same process that goes on today as bacteria recycle decaying organic matter into minerals and gases.

How could the sulfur-dependent bacteria have thrived during a geologic time when sulfur levels were so low? “It seems that they were in shallow water, where evaporation may have been high enough to concentrate the sulfate, and that would make it abundant enough to support the bacteria,” says Zhelezinskaia.

Zhelezinskaia is now analyzing carbonate rocks of the same age from Western Australia and South Africa, to see if the pattern holds true for rocks formed in other shallow water environments. If it does, the results may change scientists’ understanding of one of Earth’s earliest biological processes.

“There is an ongoing debate about when sulfate-reducing bacteria arose and how that fits into the evolution of life on our planet,” says Farquhar. “These rocks are telling us the bacteria were there 2.5 billion years ago, and they were doing something significant enough that we can see them today.”

This research was supported by the Fulbright Program (Grantee ID 15110620), the NASA Astrobiology Institute (Grant No. NNA09DA81A) and the National Science Foundation Frontiers in Earth-System Dynamics program (Grant No. 432129). The content of this article does not necessarily reflect the views of these organizations.