A deadly disease that is wiping out salamanders in parts of Europe will inevitably reach the U.S. through the international wildlife trade unless steps are taken to halt its spread, says University of Maryland amphibian expert Karen Lips.

The recently described fungus, Batrachochytrium salamandrivorans, has caused a crash in wild populations of fire salamanders in the Netherlands. After the fungus was discovered in Europe last year, Lips joined an international team of experts that tested more than 5,000 amphibians from four continents. Their results, published Oct. 31 in the journal Science, show the fungus probably originated in Southeast Asia 30 million years ago and reached Europe through the international trade in Asian newts, which are popular with amphibian fanciers. 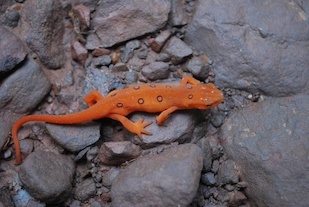 The fungus, which is lethal to at least a dozen European and North American salamander and newt species, has not yet reached the Americas, says Lips, a UMD associate professor of biology and one of the world’s top experts in amphibian diseases. Lips and a colleague, Cornell University Professor Kelly Zamudio, screened about 1,400 frogs, salamanders and newts from sites in North and South America and found no trace of the fungus.

But Chinese fire belly newts are potential carriers of B. salamandrivorans, and more than 2.3 million of them were imported into the U.S. for the pet trade between 2001 and 2009. If even a few of these animals have the fungus, “it’s a question of when, not if, this fungus reaches North America,” says UMD graduate student Carly Muletz, a co-author of the Science paper.

Lips says scientists can act now to track, and ideally prevent, a disease outbreak from ravaging wild populations of newts and salamanders in the Americas. Current U.S. regulations focus on monitoring live animal imports to prevent the spread of diseases to humans and livestock, not to native wildlife, says Lips. She and other experts recently briefed Congressional staffers on the need to fill in this regulatory gap.

“If scientists and policy makers can work together on this, we have a rare opportunity to stop an epidemic from spreading around the globe with potentially deadly effect,” says Lips.

North America is the global center of salamander biodiversity, home to more than 150 of the world’s 655 known salamander species. Reclusive and mostly nocturnal, these rarely-seen creatures are the subjects of folklore—associated with fire because of some species’ brilliant coloring, poisons because of the toxins some produce to discourage predators, and immortality because of their ability to regenerate lost limbs.

B. salamandrivorans rapidly invades salamanders’ skin, which plays a crucial role in the animals’ respiratory system. Scientists don’t yet know how it kills its hosts, Lips said, but a sister fungus, Batracochytrium dendrobatidis, also infects skin, interfering with amphibians’ breathing and their ability to absorb water and essential minerals. B. dendrobatidis infects more than 520 amphibian species around the world, has caused steep declines in populations of frogs and salamanders, and has driven some species into extinction. The scientists fear B. salamandrivorans might prove equally devastating.

The researchers found that newts, a subgroup within the salamander family, are especially vulnerable to B. salamandrivorans. When two common North American species—the Eastern red-spotted newt, a showy animal often kept as a pet, and the rough-skinned newt, which ranges from British Columbia to the Mexican border—were exposed to the fungus in laboratory tests, 100% of the animals died.

“We have billions of these newts living in the wild all across the continent,” says Lips, “and because they’re highly sensitive to this fungus, they could amplify it or spread it to other groups of salamanders. We don’t know what the consequences of that might be.”

Lips and her colleagues hope to establish a surveillance network to monitor wild salamander and newt populations for signs of the fungus. Lips and other experts are also calling for a testing program to sample animals in the wildlife trade that may carry the pathogen, to trace its movement and mitigate its impact.

“This study captures a pathogen’s first steps out of Asia,” says Zamudio. “The more globalized our world becomes, the more our biodiversity will be challenged by diseases moving into areas where they have never occurred before.”

The study published in Science was led by two professors from Ghent University in Belgium—An Martel, who first isolated B. salamandrivorans, and Frank Pasmans—with contributions from researchers at 20 institutions worldwide.

This research was partially supported by the Ghent University Special Research Fund. The U.S. authors’ research was funded by a University of Maryland-Smithsonian Institution Seed Grant, an Illinois Department of Natural Resources State Wildlife Grant, and National Science Foundation Grants DEB-0717741, DEB-0815315, and DEB 1120249. The content of this article does not necessarily reflect the views of the funders.

Karen Lips lab
Karen Lips, Beyond “More Data Are Needed” – How Scientists Can Participate in the Policy Process

Photo: Mortality was 100% among Eastern red-spotted newts (Nothophthalmus viridescens) exposed to a fungus from Asia that recently reached Europe, probably carried by salamanders in the pet shop trade. The newt, shown here in its juvenile stage, is a North American native and a popular aquarium pet. Credit: Edward Kabay

The research paper “Recent introduction of a chytrid fungus endangers Western Palearctic salamanders,” by A. Martel et al, was published Oct. 31, 2014 in Science. Download an abstract at http://www.sciencemag.org/lookup/doi/10.1126/science.1258268