If you have been fortunate enough to attain a college degree, chances are you’ve benefited from the help of many individuals along the way. “It could be a professor you remember for the rest of your life or a donor whom you have never met,” describes CMNS Board of Visitors Member Tom Snitch, president of Little Falls Associates, Inc., which specializes in solving scientific and technological challenges in Asia. 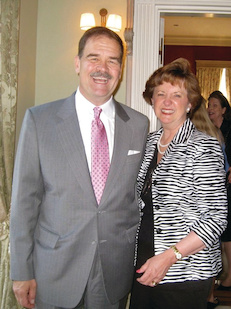 Snitch firmly believes that one good turn deserves another. “We all share a responsibility to pay it back or pay it forward to higher education institutions with financial support, volunteer efforts or professional advice.” Snitch and his wife Mary, Director of Industry Partnership and Programs with Lockheed Martin Corporation, certainly practice what they preach. The couple will be honored this spring for all of their volunteer and philanthropic support with the 2012 University of Maryland Honorary Alumni Association Membership. Their support of the university goes back more than two decades.

An 18-year member of Achievement Rewards for College Scientists (ARCS), Mary describes how her ARCS affiliation gave her a unique opportunity for hands-on experience with the university, initially with the Clark School of Engineering. “Maryland struck a chord with us. They have selected such fabulous scholars to receive ARCS awards,” she notes. “The university has a magnificent way of reaching out. It was easy and natural to form the strong relationship that we enjoy today,” says Mary, who also maintains ties with the university through Lockheed Martin, which annually supports up to two ARCS Foundation Lockheed Martin Scholars. The 2011 CMNS recipient is Stefanie Sherrill,  a stellar Ph.D. student who is pursuing her degree in chemistry.

It was through ARCS local events that both Tom and Mary came to know then- University President C. Dan Mote and ARCS Member Patsy Mote. Over time, Tom visited with the president on campus to discuss ways the couple could get further involved with the university. As the university’s $1 billion Great Expectations capital campaign launched, Tom became involved in the CMNS strategic planning process and the redesign of graduate programs in the life sciences. “Before you know it, I was on the board,” says Tom, who is proud of his reputation for getting things done. He has been particularly interested in the role of science for undergraduates. “How do you take science students and help them become literate in policymaking—how do you bridge the world of hard and soft sciences?” asks Tom, who attended every open forum session for candidates for the dean position and continues to raise funds for the dean’s special projects. “Tom and Mary are wonderful friends of our college,” says CMNS Dean Jayanth Banavar. “They continue to be very giving of their time and their resources, which have made enormous positive differences in so many lives.”

Even though they are not graduates of Maryland, the couple embraces the university as their virtual alma mater. Tom fondly remembers the opportunity he had to lead the university’s Marching Band. “At an ARCS benefit, I won a silent auction item to direct the band at a home football game. I practiced with the band and met the band members, a surprising number of whom were math and science majors. It was one of the few times in my life when I could raise my hand to 250 college students, and they followed my orders.”

Generous supporters of the college in terms of both time and money, in 2011 the Snitchs endowed a CMNS undergraduate scholarship to support students who demonstrate both academic merit and financial need. “If we can help one student who otherwise could not follow their dream in the sciences, that is a gift for us,” says Tom, who notes how he and Mary welcome students into their home and also serve as coaches and mentors. “When we see these students walk down the aisle at graduation, we know we made a great investment. When one of the students that we helped receives the Nobel Prize, we want an invitation.”

“We’ve lived in Maryland for many years and consider ourselves Marylanders,” explains Mary. “Our association with the flagship university of the state is one of the great honors of our lives.”