A Quantum Leap in Computing 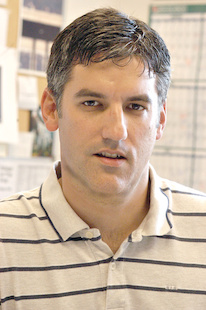 On their quest to develop a quantum computer able to perform processing tasks never before possible, CMNS physicists are unraveling the mysteries of quantum mechanics that baffled even Albert Einstein. “A quantum computer won’t simply improve today’s hardware, it would totally revolutionize computing,” says Bice Zorn Professor of Physics Christopher Monroe, who conducts his research through the Joint Quantum Institute (JQI), a partnership between the University of Maryland and the National Institute of Standards and Technology.

The building blocks of a quantum computer would differ radically from a classical computer. A traditional computer is comprised of bits, which can be either a 0 or a 1. But the rules of physics change in the quantum world of atomic and subatomic particles. A quantum computer’s qubits could be a  0 and a 1 simultaneously, according to the quantum theory of superposition. “It would offer the potential for storing and manipulating much larger amounts of memory than conventional computers,”  says Monroe.

While it is largely unclear just what doors that power could unlock, one thing is certain: a quantum computer would have major implications for computer security, says JQI Co-Director and Physics Professor Steve Rolston. “It would change all the rules about how our online cryptography works,” he says, by quickly solving the mathematical code that keeps information secure.

Monroe is experimenting with using ions, electrically charged atoms, as qubits. So far, his lab has strung together about 20 of the qubits in a vacuum chamber, but a quantum computer might require millions. To retain their quantum characteristics, these qubits cannot interact with the environment, a task that becomes more challenging as more and more are strung together.

To solve the problem, he is turning to something that sounds like it is straight out of science fiction: teleportation. This quantum principle allows information to be transferred from one place to another without traveling through any physical medium. In 2009, his lab was the first in the world to successfully teleport data from one atom to another. Monroe envisions a quantum computer architecture where strings of 50 qubits or so are connected to each other with photons or light particles. Quantum teleportation would allow the information to move throughout the network. “This is some of the weirdest, goofiest physics you can imagine,” says Monroe, “and it could totally change the future  of electronics.”

JQI scientists are tackling another obstacle in quantum computing: high error rates due to fragile quantum systems. In a recent Nature Communications article, a JQI team proposes a method for correcting errors by applying electrical pulses to the qubits. “The big problem in quantum computing is that a pure quantum state does not last long,” says team leader Sankar Das Sarma, the Richard E. Prange Chair in Physics and Distinguished University Professor. “This radically new idea promises to keep a quantum state coherent for a long time, so we will have to worry much less about errors.”

Das Sarma is also exploring another method to eliminate the high error rate, using elusive particles, called Majorana fermions, as qubits. These qubits differ from others in that they are topological—allowing them to retain their quantum coherence even when they are perturbed, disturbed, stretched, twisted or otherwise deformed. In 2010, Das Sarma’s team theorized a method for artificially producing Majorana fermions in ordinary semiconductor materials. In another recent Nature Communications article, Das Sarma and colleagues propose a method for simplifying and improving the process, making it more practical, and thus bringing physicists even closer to building a quantum computer.