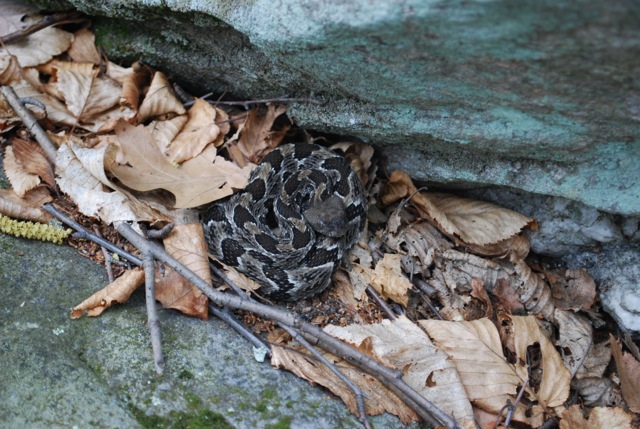 MINNEAPOLIS, MN - The scientific name of the timber rattlesnake, Crotalus horridus, is a sign of the fear and loathing this native North American viper has inspired. But new research by a team of University of Maryland biologists shows the timber rattlesnake indirectly benefits humankind by keeping Lyme disease in check. The team’s findings, to be presented today (Tuesday, Aug. 6) in a talk at the annual conference of the Ecological Society of America, highlight the potential benefits of conserving all species – even those some people dislike.

Human cases of Lyme disease, a bacterial illness that can cause serious neurological problems if left untreated, are on the rise. The disease is spread by black-legged ticks, which feed on infected mice and other small mammals. Foxes and other mammal predators help control Lyme disease by keeping small mammal populations in check. The decline of these mammal predators may be a factor in Lyme disease’s prevalence among humans.

Timber rattlers are also top predators in Eastern forests, and their numbers are also falling, so former University of Maryland graduate student Edward Kabay wanted to know whether the rattlers also play a role in controlling Lyme disease.

Kabay used published studies of timber rattlers’ diets at four Eastern forest sites to estimate the number of small mammals the snakes consume, and matched that with information on the average number of ticks each small mammal carried. The results showed that each timber rattler removed 2,500-4,500 ticks from each site annually.

Because not every human bitten by an infected tick develops Lyme disease, the team did not estimate how many people are spared from the disease through the ecosystem service that timber rattlesnakes provide. But Kabay, who is now a science teacher at East Chapel Hill High School, and his research colleagues will talk about the implications of their findings at 4:20 pm in Room 1011 of the Minneapolis Convention Center.

Timber rattlesnakes are endangered in six Eastern states and threatened in five more.

“Habitat loss, road kills, and people killing them out of fear are the big issues,” said Kabay’s advisor, Associate Biology Prof. Karen Lips. “They are non-aggressive and rarely bite unless provoked or stepped upon.”

Lips, who directs UMD’s graduate program in sustainable development and conservation biology, will answer reporters’ questions in the ESA press room after the session ends.