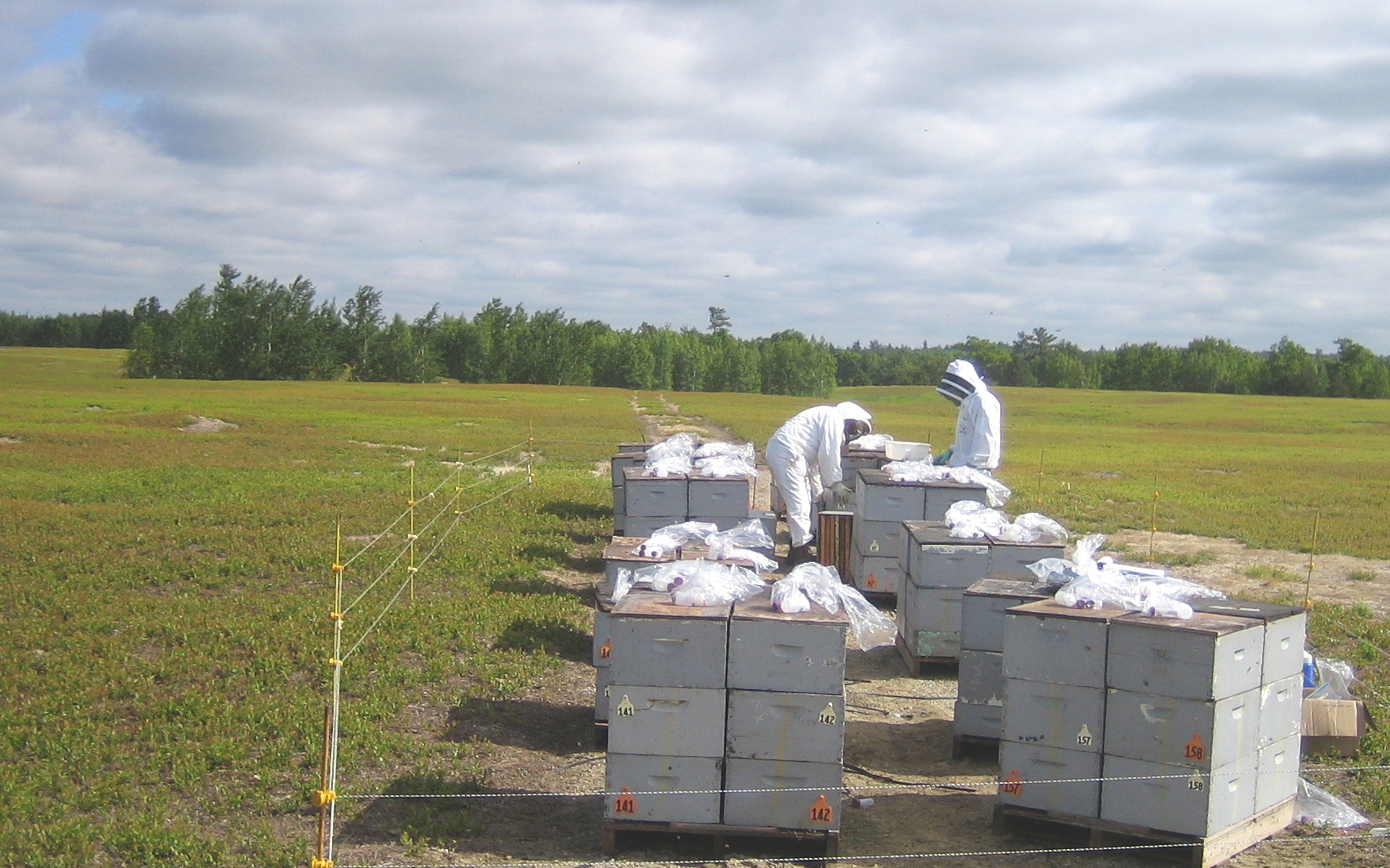 COLLEGE PARK, Md - Commercial honey bees used to pollinate crops are exposed to a wide variety of agricultural chemicals, including common fungicides which impair the bees’ ability to fight off a potentially lethal parasite, according to a new study by researchers at the University of Maryland and the U.S. Department of Agriculture.

The study, published July 24 in the online journal PLOS ONE, is the first analysis of real-world conditions encountered by honey bees as their hives pollinate a wide range of crops, from apples to watermelons.

The researchers collected pollen from honey bee hives in fields from Delaware to Maine. They analyzed the samples to find out which flowering plants were the bees’ main pollen sources and what agricultural chemicals were commingled with the pollen. The researchers fed the pesticide-laden pollen samples to healthy bees, which were then tested for their ability to resist infection with Nosema ceranae – a parasite of adult honey bees that has been linked to a lethal phenomenon known as colony collapse disorder.

On average, the pollen samples contained 9 different agricultural chemicals, including fungicides, insecticides, herbicides and miticides. Sublethal levels of multiple agricultural chemicals were present in every sample, with one sample containing 21 different pesticides. Pesticides found most frequently in the bees’ pollen were the fungicide chlorothalonil, used on apples and other crops, and the insecticide fluvalinate, used by beekeepers to control Varroa mites, common honey bee pests.

In the study’s most surprising result, bees that were fed the collected pollen samples containing chlorothonatil were nearly three times more likely to be infected by Nosema than bees that were not exposed to the fungicide, said Jeff Pettis, research leader of the USDA’s Bee Research Laboratory and the study’s lead author. The miticides used to control Varroa mites also harmed the bees’ ability to withstand parasitic infection.

Beekeepers know they are making a trade-off when they use miticides,  said University of Maryland researcher Dennis vanEngelsdorp, the study’s senior author. The chemicals compromise bees’ immune systems, but the damage is less than it would be if mites were left unchecked.

But the study’s finding that common fungicides can be harmful at real world dosages is new, and points to a gap in existing regulations, vanEngelsdorp said.

“We don’t think of fungicides as having a negative effect on bees, because they’re not designed to kill insects,” vanEngelsdorp said. Federal regulations restrict the use of insecticides while pollinating insects are foraging, he said, “but there are no such restrictions on fungicides, so you’ll often see fungicide applications going on while bees are foraging on the crop. This finding suggests that we have to reconsider that policy.”

In an unexpected finding, most of the crops that the bees were pollinating appeared to provide their hives with little nourishment. Honey bees gather pollen to take to their hives and feed their young. But when the researchers collected pollen from bees foraging on native North American crops such as blueberries and watermelon, they found the pollen came from other flowering plants in the area, not from the crops. This is probably because honey bees, which evolved in the Old World, are not efficient at collecting pollen from New World crops, even though they can pollinate these crops.

The study’s findings are not directly related to colony collapse disorder, the still-unexplained phenomenon in which entire honey bee colonies suddenly die. However, the researchers said the results shed light on the many factors that are interacting to stress honey bee populations.

SourceFed asks, "Where are the damn bees going?!"