An international team of astronomers that includes the University of Maryland’s Sylvain Veilleux has found the farthest galaxy group identified to date. Called EGS77, the trio of galaxies dates to a time when the universe was only 680 million years old, or less than 5% of its current age of 13.8 billion years.

More significantly, observations show the galaxies are participants in a sweeping cosmic makeover called reionization. The era began when light from the first stars changed the nature of hydrogen throughout the universe in a manner akin to a frozen lake melting in the spring. This transformed the dark, light-quenching early cosmos into the one we see around us today. 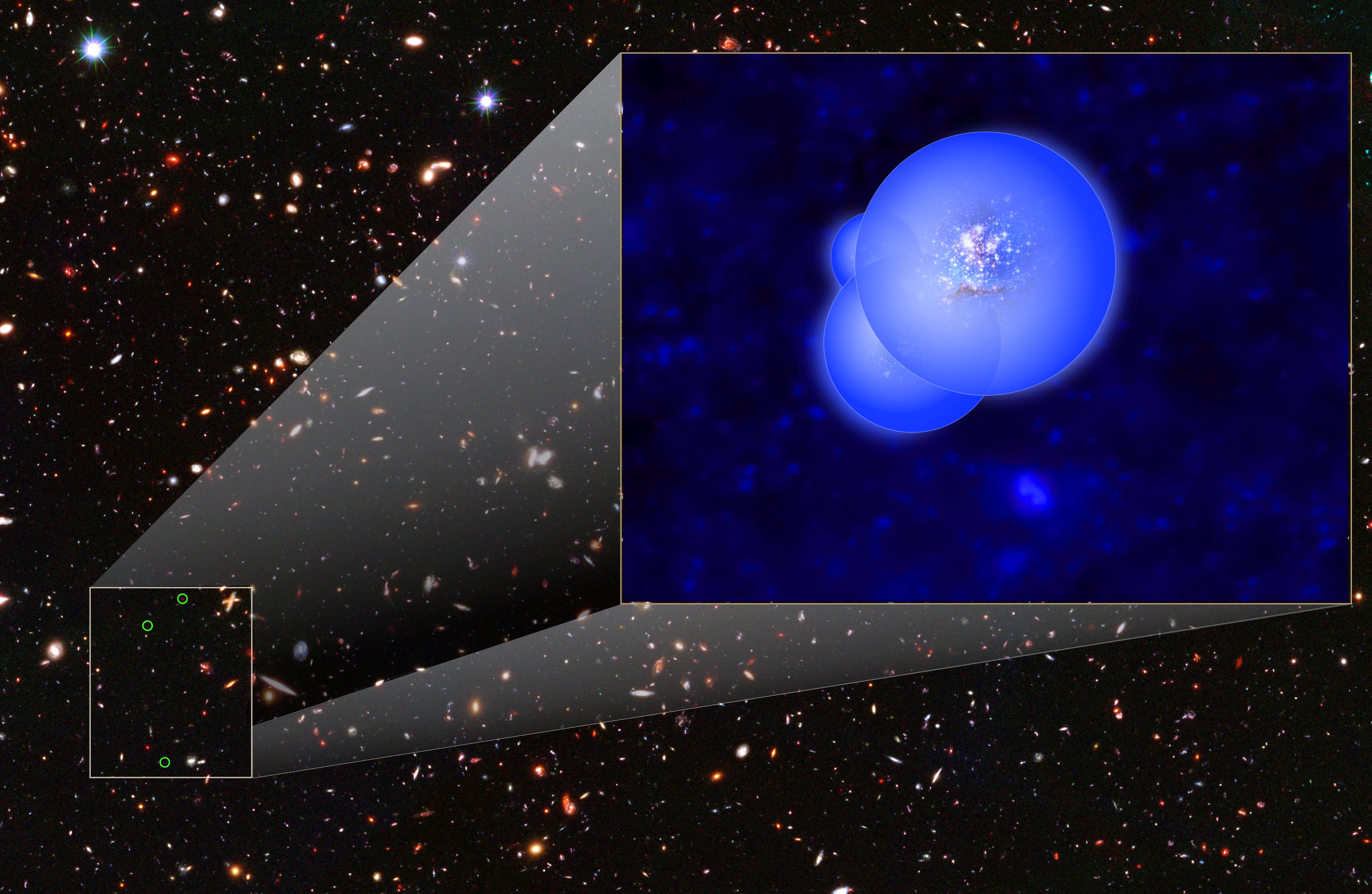 The discovery was presented on January 5, 2020, at the 235th meeting of the American Astronomical Society (AAS) in Honolulu. A paper describing the findings has also been submitted to The Astrophysical Journal.

“The young universe was filled with hydrogen atoms, which so attenuate ultraviolet light that they block our view of early galaxies,” said James Rhoads at NASA’s Goddard Space Flight Center in Greenbelt, Maryland, who presented the findings at AAS. “EGS77 is the first galaxy group caught in the act of clearing out this cosmic fog.”

While more distant individual galaxies have been observed, EGS77 is the farthest galaxy group to date showing the specific wavelengths of far-ultraviolet light revealed by reionization. This emission, called Lyman alpha light, is prominent in all members of EGS77.

“This discovery is extremely exciting because we think that these are the very galaxies that re-ionized the universe in the distant past and made it transparent to ultraviolet light as a whole,” said Veilleux, a professor in the Department of Astronomy and the Joint Space-Science Institute at UMD.

In its earliest phase, the universe was a glowing plasma of particles, including electrons, protons, atomic nuclei, and light. Atoms could not yet exist. The universe was in an ionized state, similar to the gas inside a lighted neon sign or fluorescent tube.

After the universe expanded and cooled for about 380,000 years, electrons and protons combined into the first atoms—more than 90% of them hydrogen. Hundreds of millions of years later, this gas formed the first stars and galaxies. But the very presence of this abundant gas poses challenges for spotting galaxies in the early universe.

Hydrogen atoms readily absorb and quickly re-emit far-ultraviolet light known as Lyman alpha emission, which has a wavelength of 121.6 nanometers. When the first stars formed, some of the light they produced matched this wavelength. Because Lyman alpha light easily interacted with hydrogen atoms, it couldn’t travel far before the gas scattered it in random directions.

“Intense light from galaxies can ionize the surrounding hydrogen gas, forming bubbles that allow starlight to travel freely,” said team member Vithal Tilvi, a researcher at Arizona State University in Tempe. “EGS77 has formed a large bubble that allows its light to travel to Earth without much attenuation. Eventually, bubbles like these grew around all galaxies and filled intergalactic space, reionizing the universe and clearing the way for light to travel across the cosmos.

EGS77 was discovered as part of the Cosmic Deep And Wide Narrowband (Cosmic DAWN) survey, for which Rhoads serves as principal investigator. The team imaged a small area in the constellation Boötes using a custom-built filter on the National Optical Astronomy Observatory’s Extremely Wide-Field InfraRed Imager (NEWFIRM), which was attached to the 4-meter Mayall telescope at Kitt Peak National Observatory near Tucson, Arizona.

Because the universe is expanding, Lyman alpha light from EGS77 has been stretched out during its travels, so astronomers actually detect it at near-infrared wavelengths. We can’t see these galaxies in visible light now because that light started out at shorter wavelengths than Lyman alpha and was scattered by the fog of hydrogen atoms.

To help select distant candidates, the researchers compared their images with publicly available data of the same region taken by NASA’s Hubble and Spitzer space telescopes. Galaxies appearing brightly in near-infrared images were tagged as possibilities, while those appearing in visible light were rejected as being too close.

The team confirmed the distances to EGS77’s galaxies by using the Multi-Object Spectrometer for Infra-Red Exploration (MOSFIRE) on the Keck I telescope at the W. M. Keck Observatory on Maunakea, Hawaii. The three galaxies all show Lyman alpha emission lines at slightly different wavelengths, reflecting slightly different distances. The separation between adjacent galaxies is about 2.3 million light-years, or slightly closer than the distance between the Andromeda galaxy and our own Milky Way.

“We've been using this particular combination of telescope, camera and filters for more than a decade—starting with the Ph.D. research of UMD alumna Hannah Krug,” added Veilleux. “It’s very gratifying to see that this work is still bearing fruit.”

Astronomers expect that similar reionization bubbles from this era will be rare and hard to find. The upcoming James Webb Space Telescope and planned Wide Field Infrared Survey Telescope (WFIRST) may be able to uncover additional examples, further illuminating this important transition in cosmic history.

This animation shows EGS77's place in cosmic history, flies to the galaxies, and illustrates how ultraviolet light from their stars create bubbles of ionized hydrogen around them. Credit: NASA's Goddard Space Flight Center

This release was adapted from text provided by NASA’s Goddard Space Flight Center.