The year was 1985. Linda Dalo wanted to spend more time with her five-year-old daughter. Cecilia Jordan was expecting her first child and worried about balancing a family with a full-time job. Both women were at a crossroads in their administrative careers when they approached Professor John Corliss, then chairman of the Department of Zoology, with an interesting proposition. They wanted to share a job in the department’s undergraduate office.

“For 16 years we shared an administrative position in zoology,” recalls Dalo. “I worked Monday through Wednesday mornings, and Cecilia worked Wednesday afternoons through Friday.” Their arrangement pre-dated the use of computers and email. “We would leave copious, typed notes for one another so we knew where to pick up with our work,” says Jordan. “It was very progressive of our chair and dean, and the arrangement gave us time with our children.” 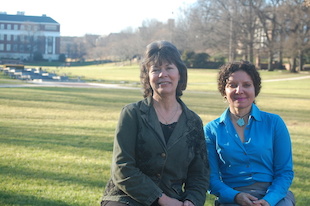 To further provide continuity, the two would meet for lunch each Wednesday, a tradition they continue to uphold. “We have a wonderful friendship that has grown over the years. We’ve seen each other through a lot of changes, personally and professionally,” says Dalo. Their common bond: “We enjoy working with students. After nearly 30 years, it has been so gratifying to see so many students leave the college and pursue successful careers,” adds Jordan.

Throughout the years, their commitment and dedication to students, the college and the university has not gone unnoticed.

Both women have received the college’s Staff Excellence Award. In 2008 Dalo received the President’s Distinguished Service Award, and in 2005 she received the Board of Regents Staff Award, an honor Jordan received in 2011.

“Lots of students have cried on our shoulders and celebrated happy moments in their academic careers,” explains Dalo. “One of their biggest worries was about getting into medical school.” Technology is now helping maintain alumni ties to CMNS. Through LinkedIn, Dalo has reconnected with many CMNS graduates. “There are many doctors, dentists and other professionals that still keep in touch.”